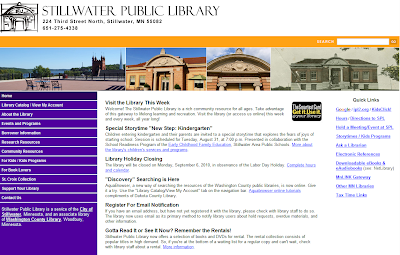 Excerpt: Patrons who use the Stillwater Public Library on Tuesday and Thursday mornings can breathe a sigh of relief — at least for now.

The Stillwater City Council this week approved budgeting an additional $14,801 for the library to avoid cutting those morning hours in 2011, said City Administrator Larry Hansen.

"Whether that $14,801 stays in the budget until the final levy is adopted in December, I don't know, but I'm hopeful that it will," Hansen said.

A survey of library users completed in January showed that "the one thing that people really wanted improved ... they wanted more hours," said Lynne Bertalmio, library director. The library board voted in 2008 to do away with Sunday hours because of budget limitations, she said.

The library's proposed budget for 2011 is about $1.12 million, with about $103,000 coming from private support and the remainder from the city.
Posted by Retiring Guy at 6:36 AM