Please give a warm welcome to our next speaker, Donald Trump 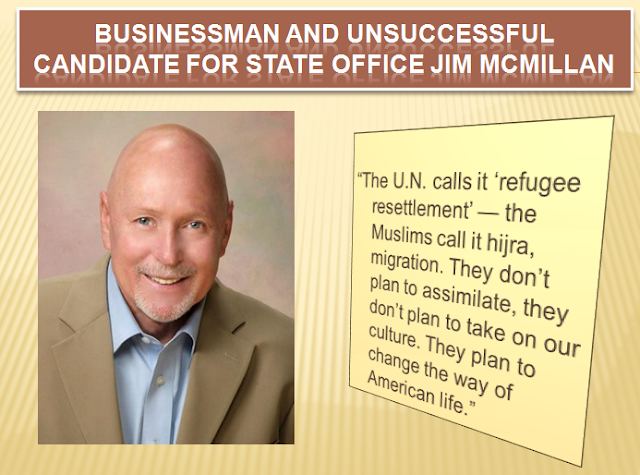 As quoted in Refugee Crisis in Syria Raises Fears in South Carolina.  (The New York Times, 9/25/2015)

Another speaker claimed that "25 Syrian refugees are already living among them."


None of Syria’s four million refugees have been resettled in this part of South Carolina in the last year, according to the State Department. Since May, a Christian nonprofit group, World Relief, has placed 32 refugees in the region, but most of them were Christians fleeing troubled countries like Myanmar and the Democratic Republic of Congo.


After about two hours of testimony — during which McMillan admitted he didn't live in the district until March 31 — the committee deliberated for nearly an hour before deciding he “did not meet the constitutional and statutory requirements for filing,” said Joel Sawyer, interim executive director of the state party.


McMillan is co-owner and president of construction company McMillan-Carter Inc. and founder of Panacea Bio-Fuel Inc. He describes himself as “the true conservative in the race,” one who supports tax credits for families to send their children to private schools.


Jim got his butt kicked.

The Donald is likely to stir up the crowd.

@realDonaldTrump
Posted by Retiring Guy at 10:14 AM