GET ME REWRITE: Mitch McConnell maintains stranglehold on title of "Most Amoral Member of Congress" 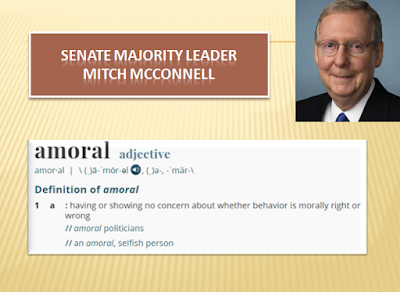 McConnell's comments came after a pledge he made last month that the Senate would take no action on the nomination, setting the stage for a political fight. McConnell said Wednesday that the "the decision the Senate made weeks ago remains about a principle, not a person."

"It seems clear President Obama made this nomination not, not with the intent of seeing the nominee confirmed, but in order to politicize it for purposes of the election," McConnell said.

"What can't be undone is a lifetime appointment to a young man or woman who believes in the quaint notion that the job of a judge is to follow the law,” McConnell said at the Paducah Area Chamber of Commerce on Tuesday. "That’s the most important thing we’ve done for the country, which cannot be undone."

Nothing here about letting the American people decide.