How do we know it worked? "Many Congressional offices reported being swamped with calls"

Hardly alone in this reverberating protest. 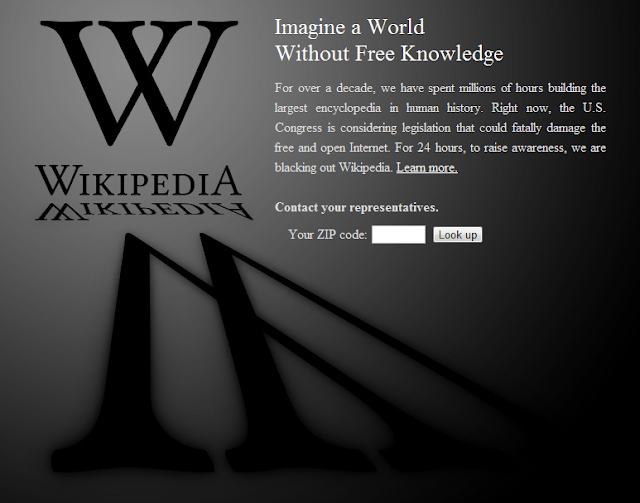 Jeff Gelles: Worries about online-piracy bill are not so far-fetched. (Philadelphia Inquirer, 1/19/2012)

Excerpt: No such blacklist operates in the United States - yet.  But opponents of antipiracy legislation nearing a vote in Congress say the prospect isn't as far-fetched as it might sound - not because of the aims of those backing the bills, but because of their ham-handedness.

"Once you open up the door, who knows where it leads?" says Julie Samuels, a lawyer at the Electronic Frontier Foundation, a San Francisco nonprofit that helped organize a nationwide protest Wednesday against the House's Stop Online Piracy Act (SOPA) [summary found here; let's hope her support is crumbling] and the Senate's sister bill, the Protect Intellectual Property Act (PIPA) [summary found here; Herb Kohl listed as co-sponsor.]

No members of the Wisconsin House delegation are listed as co-sponsors.  9 of 31 28 co-sponsors are from California.

To dramatize worries about the legislation, which is backed by the film and music industries, thousands of U.S. websites went dark for the day or steered visitors to information about the bills. As intended, many congressional offices reported being swamped with calls.
Posted by Retiring Guy at 8:14 AM