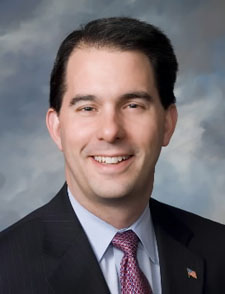 And what is the Wisconsin Reporter, you might ask?

Excerpt:   Madison Capital Times editor emeritus Dave Zweifel recently noticed that stories from WisconsinReporter.com were showing up in weekly newspapers around the state. “What is this new wire service-like provider of news to local papers?” he asked. “Turns out it’s a new service concocted by the Franklin Center for Government and Public Integrity, a conservative nonprofit that has had its hands in the tea party movement and the pro-Scott Walker rallies.” Launched in January, WisconsinReporter.com is “yet another endeavor by opportunistic conservatives to jump in to fill a void created by the economic woes of traditional media,” writes Zweifel. “Media that want to use the stories can do so for free.”
Posted by Retiring Guy at 1:23 PM