Not sure how a bookmobile can be considered invisible, as it serves as a traveling billboard promoting library services. 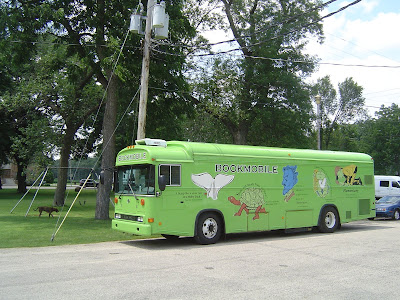 Excerpt:   Some of the most important library branches aren’t made of brick and mortar.

These “invisible branches” might be a bookmobile, home delivery service or other bridge between library patrons and materials.

Bookmobiles aren’t new. They go back hundreds of years, to when they were book wagons, said Miguel Figueroa, acting director of the American Library Association’s office for literacy and outreach services. 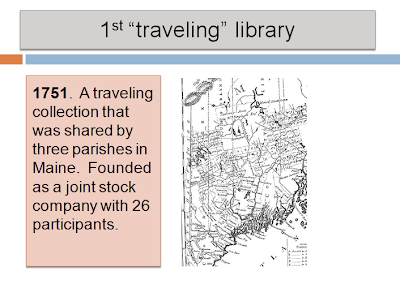 But not book wagons. 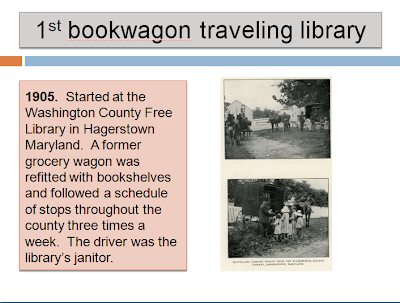 Source of both PowerPoint slides:  Famous First Facts.
“That idea of getting outside of the branch building and going to people who cannot get to the library has been around for a while,” he said.

But an aging, more diverse population has led many libraries to expand upon the typical bookmobile, despite tighter budgets.

Rural and urban library districts often use their outreach services in different ways. Districts with few branches may try to bring books to underserved areas. An urban district might have plenty of nearby branches but wants to target a specific population.

This fall, Columbus Metropolitan Library will use a $500,000 grant from the Nationwide Foundation to bolster its Ready to Read Corps. The library is purchasing a bookmobile and hiring staff to visit families in areas with low kindergarten readiness scores.
Posted by Retiring Guy at 9:54 AM