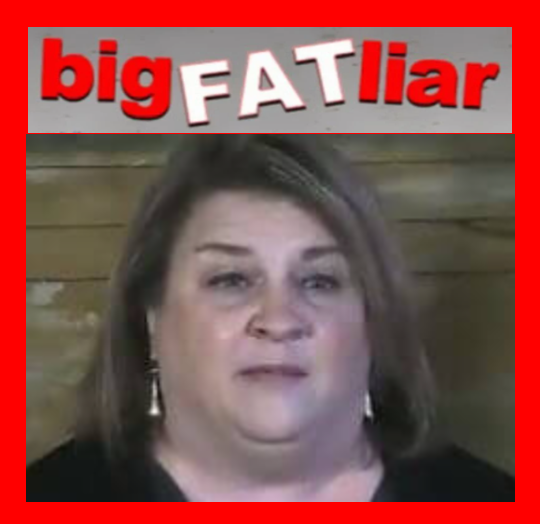 Maricopa County also said the types of files Logan cited during the briefing aren't the correct documents for determining how many early ballots were sent and received. In a follow-up tweet, the county wrote that, of 2,364,426 requests for mail-in ballots, 1,918,024 were returned. In a statement published July 15, the Republican chair of the county's Board of Supervisors also rebuked Logan's claims. [emphasis added] 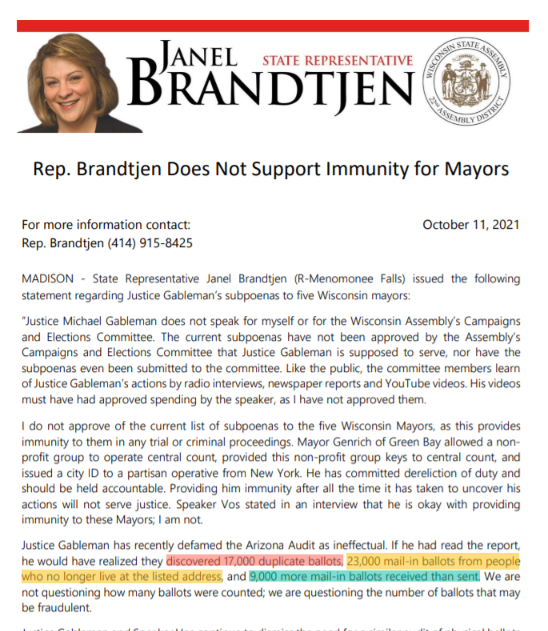 Screenshot from The Wheeler Report (highlight sadded)
October 12 update starts here
BFL Janel asserts that during the Arizona audit the Cyber Ninjas found 23,000 mail-in ballots from people who no longer live at the same address. 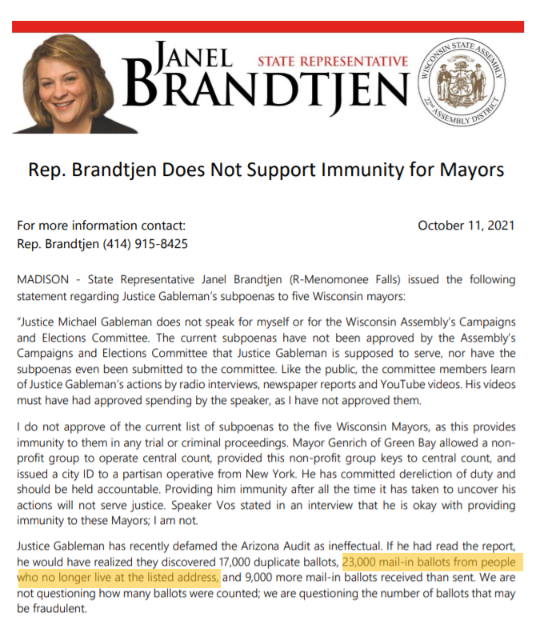 One of Cyber Ninjas "critical findings" was that 23,344 mail-in ballots were cast by people who no longer resided at their address on file. These voters, the company asserted, "should not have received their ballots by mail because they had moved," suggesting that they had been wrongly forwarded to the voters' new address, a claim amplified by the spokesperson for former President Donald Trump.

But that is not true.

According to the office of Maricopa County Recorder Stephen Richer, a Republican elected in November 2020, "As required by law, all election materials, such as ballots, are marked 'Do Not Forward — Return Service Requested.'" Returned ballots initiate a process of removing the person from the voter roll.  [emphasis added] 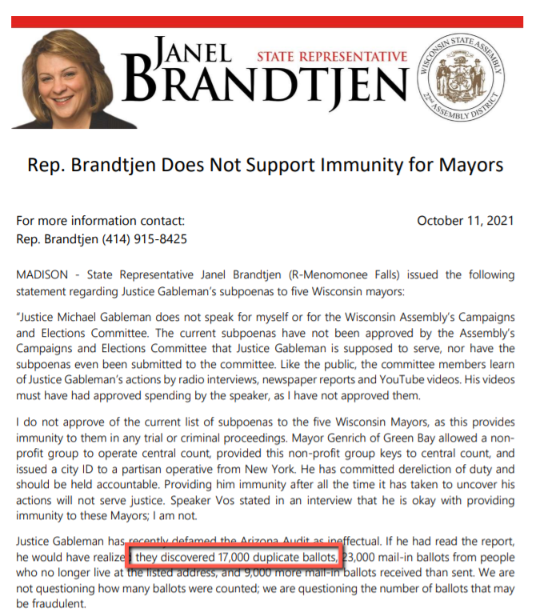 October 5 update, "One thing that irrirates the rest of us the most is a big fat liar spouting election conspiracy nonsense",  starts here.

“One of the things that irritates me the most is when everyone who's like, ‘it was the most fair election ever,’” Representative Brandtjen said. "Is it a fair election if your clerks in Milwaukee and Madison say, 'hey, you don't have to show your ID anymore’? Special voting deputies were no longer allowed in senior facilities."

9/25/2021 update, "It's what big nut and Trump sycophant Janel Brandtjen has been thinking all along",. starts here. 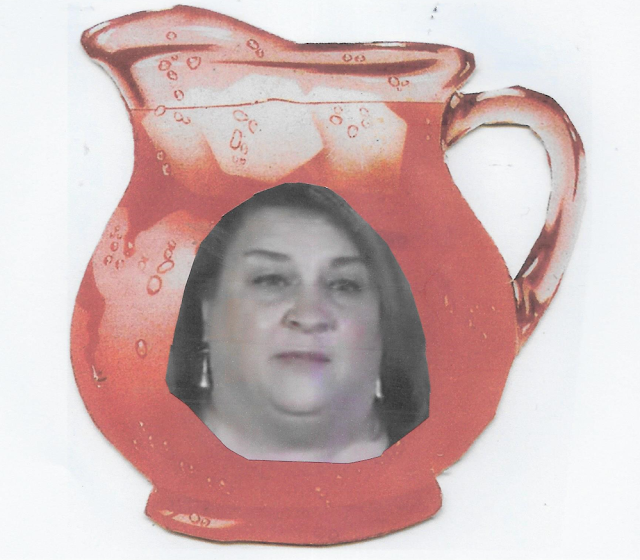 Rohn Bishop, chairman of the Fond du Lac Republican Party, said he hopes the Arizona report pushes Republicans to focus on 2022 races instead.

"I was told by a WI legislator that the AZ audit was going to be a bombshell, and that I was in the minority by not having the Republican Party of Fond du Lac County sign up for the Full Physical and Forensic Cyber Audit," he tweeted Friday.

"Hopefully, my fellow Repubs stop with this nonsense, and begin to focus on 2022 elections. Right now GOP effort is hacking off Republican Clerks, and alienating soft GOP voters who think we're nuts and wasting their tax dollars."  [emphasis added]

"It’s clear to me that the Republicans are not interested in improving our election processes but rather desperate to find some type of smoking gun that doesn’t exist," Christenson said. "I would encourage them to educate themselves on how elections work in their own state, rather than flying to Arizona or getting their intelligence from a guy who makes pillows."

McDonell said he was concerned the investigator appointed by Speaker Robin Vos did not have a deep understanding of how election records are stored in Wisconsin, comparing it to the subpoenas issued by Rep. Janel Brandtjen (R-Menomonee Falls) seeking signature-matching records even though Wisconsin doesn't do signature matching in the election verification process.
"It is very concerning to think that people who have no knowledge of the elections, and haven't brought anyone on board that does know to help them, are the ones making these requests," McDonell said.  [emphasis added]

That's what happens when an ignoramus is given the reins.
9/11/2021 update, "GOP Wisconsin State Senator Kathy Bernier smacks down Janel Brandtjen", starts here.

The Republican chair of the Senate Elections Committee held a training session to describe how Wisconsin's elections operate, which comes as Republicans ramp up their efforts to investigate the 2020 presidential election.

State Sen. Kathleen Bernier (R-Chippewa Falls) held an informational hearing Wednesday that included a panel of state and local election officials along with security experts in voting machines to help provide clarity on how elections operate.

"I thought this would be an outstanding idea because for quite a few years now I've heard misinformation and disinformation about the electoral process," Bernier said at the beginning of the presentation.

"It’s clear that these are bad faith efforts, not fact-finding missions, but rather political stunts to keep the lies about the 2020 election alive," Whitman said Wednesday on a call with reporters.  [emphasis added]

Whitman, who has been a vocal critic of former President Donald Trump’s false claims about 2020 election fraud, compared both investigations to the controversial election audit conducted in Arizona earlier this summer, saying all the efforts lack credibility and transparency and are "plagued by security and legal concerns." A group founded by Whitman released a memo Wednesday drawing parallels between the efforts in the two states.

It was actually weeks ago that lawyers for the nonpartisan Legislative Council issued two different memos finding Brandtjen alone does not have the authority to issue such subpoenas, as WKOW-TV in Madison reported. The council found the subpoenas would need the signatures of Assembly Speaker Robin Vos and Assembly Chief Clerk Ted Blazel.

Brandtjen admitted to the station that she put the flawed subpoenas together. “I’ll take responsibility for it,” said Brandtjen. “I’m not an attorney. I never claimed to be one.”

Non-attorney Brandtjen had issued 47-point legal subpoenas to Milwaukee and Brown counties that were nearly verbatim to a request made by a Republican lawmaker in Pennsylvania, as Patrick Marley reported.

State Rep. Janel Brandtjen, R-Menomonee Falls, is now suing the City of Racine for the release of emails and other documents related to the city’s dealings with CTCL. Brandtjen has made headlines in recent weeks after saying on Aug. 6 she was going to issue subpoenas demanding extensive election materials from Milwaukee and Brown counties, even though she doesn’t have the authority to issue subpoenas.

Janel has to be disappointed with the turnout at her Kenosha press.  (Most of whom are probably family and Capitol staffers.)  Yup, it downright pathetic. 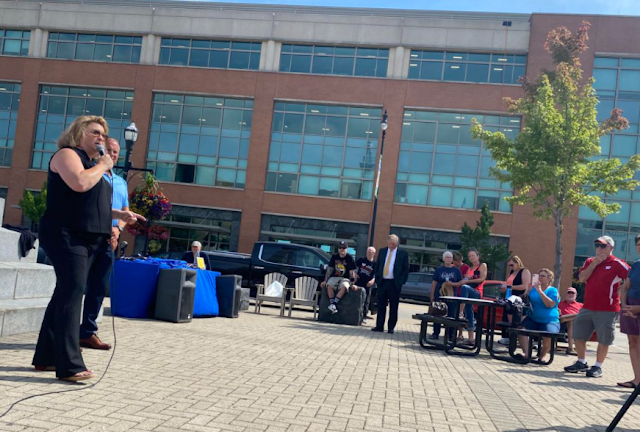 The trip is being spearheaded by Rep. Janel Brandtjen, who told her constituents last December that there was “no doubt” that Donald Trump won Wisconsin. Brandtjen recently joined likely gubernatorial candidate Rebecca Kleefisch for a video about “election reform” that was laced with disinformation and election conspiracy theories. Kleefisch has given her full endorsement to all of the Wisconsin GOP’s voter suppression bills. 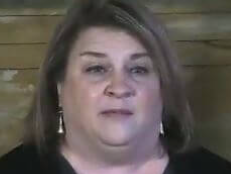 Rep. Janel Brandtjen, R-Menomonee Falls, told The Center Square she saw a lot and learned a lot while in Phoenix over the weekend. Some of the things, she said, Wisconsin could borrow if there’s ever a ballot review here.

Remember, Janel, the audit is being conducted by the nonpartisan Wisconsin Legislature Audit Bureau, not some crackpot shit show whose primary goal is to steal the election for Trump.

The review by the nonpartisan Legislative Audit Bureau will look at some issues that have faced scrutiny from courts and election observers, such as how the state maintains its voter rolls and when it allows voters to get absentee ballots without showing IDs.

The Wisconsin Legislative Audit Bureau routinely conducts dozens of audits each year.   It's their job!

Rep. Janel Brandtjen, R-Menomonee Falls and chair of the Campaigns and Elections Committee, said she’s not sure the Legislative Audit Bureau has the authority to conduct such a review.

But Brandtjen argued such a review was warranted considering the amount of private money that went into some of the state’s largest communities to help cover the costs of putting on the elections during a pandemic.

6/13/2021 update, "Gussied up Arizona tourist Janel Brandtjen has so much to answer for", starts here.

Brandtjen has not said whether she believes it’s appropriate for Arizona officials to accept private funds for their review of ballots. She has not said why she accepted a privately funded trip in light of her opposition to private donations for administering elections. She and the other Wisconsin lawmakers did not return phone calls Saturday.  [emphasis added] 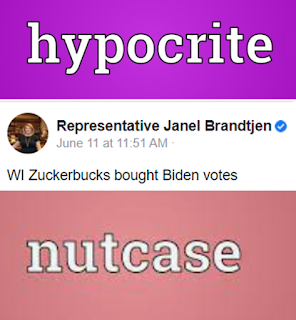 Original 6/12/2021 post, "GET ME REWRITE:  Janel Brandtjen gets herself all gussied up for dark-money funded field trip to Arizona", starts here.

"The point of the trip is to observe a large-scale recounting process using volunteers and contracted vendors to determine ballot integrity and possible reconstruction of the Dominion machine programming," Rep. Janel Brandtjen, R-Menomonee Falls, said in a Wednesday letter to Assembly Speaker Robin Vos of Rochester seeking approval for the trip.

Vos approved the request, according to a spokeswoman.

Brandtjen said the trip will be paid for by a group called Voices and Votes, self-described as an organization aimed at "protecting free speech from cancel culture."

Do the math.  It's a very simpole 1 + 1 exercise
From the Voices and Votes website (highlights added) 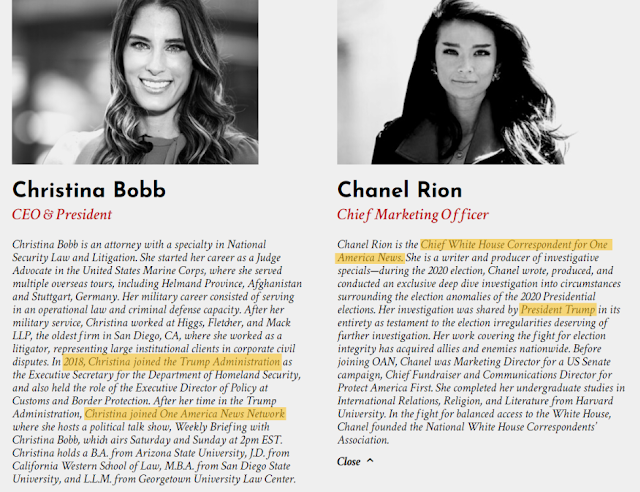 As former President Donald Trump prepres to restart his rallies, The New York Times reports that aides and others joke about Trump’s frequent consultations with conspiracy-minded One America News reporter Christina Bobb.

In an article entitled “At Once Diminished and Dominating, Trump Prepares for His Next Act,” Annie Karni and Maggie Haberman flesh out reporting from earlier this week that Trump believes he will be “reinstated” to the presidency this August, and add that he also believes Republicans will be reinstated to the Senate majority at the same time.

Their reporting also reveals that Trump is being heavily influenced by Bobb, a reporter for OAN who constantly pushes the sorts of election lies that fed the Capitol insurrection: