Dear Billie, Talk about bullet proof back pack inserts? No thank you.

From my inbox (now in trash)


A California man has joined the growing ranks of entrepreneurs pushing bulletproof backpacks as a solution to increasingly bloody school shootings.

But experts are skeptical that the armor would work in any but the luckiest circumstances for the kid wearing it. They're equally skeptical that the psychological cost of turning schoolkids into soldiers is worth the off chance that a slab of armor might stop a bullet.

"There is no serious research that would support this approach as a practical measure to save lives in a school shooting," Matthew Mayer, a Rutgers professor and school-shooting expert, told The Daily Beast. 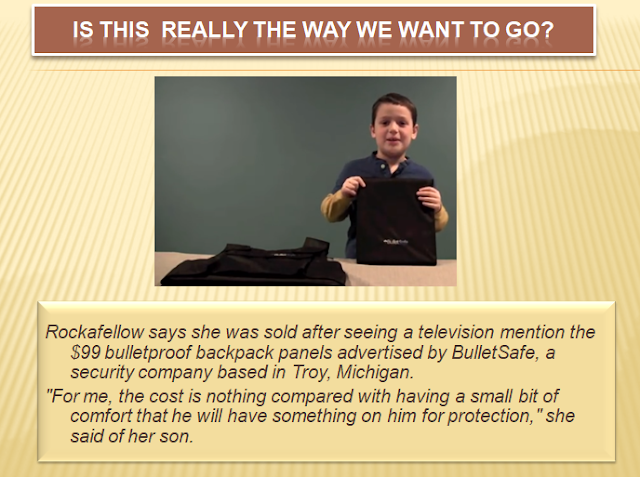 Better check your local school's regulations before you spend that $99 per child.

And, no, it's not just Seattle.


As parents and children around the country begin heading back to class, more and more schools are banning backpacks from their buildings.

More education officials are forbidding their students from using bags and purses while on school grounds, as a result of the rise in school shootings. High schools in Texas, Illinois, Ohio, and other states have all sent word to parents that their children will have to carry their books to and from class this fall.