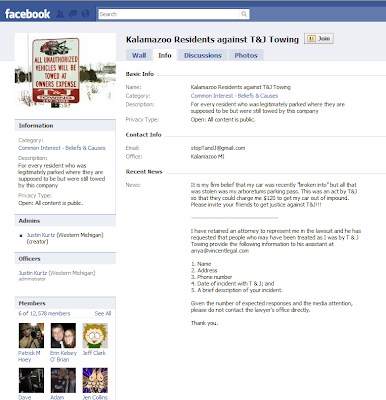 Excerpt: Web sites like Facebook, Twitter and Yelp have given individuals a global platform on which to air their grievances with companies. But legal experts say the soaring popularity of such sites has also given rise to more cases like Mr. Kurtz’s, in which a business sues an individual for posting critical comments online.

The towing company’s lawyer said that it was justified in removing Mr. Kurtz’s car because the permit was not visible, and that the Facebook page was costing it business and had unfairly damaged its reputation.

Some First Amendment lawyers see the case differently. They consider the lawsuit an example of the latest incarnation of a decades-old legal maneuver known as a strategic lawsuit against public participation, or Slapp.

Many states [27, the article later specifies] have anti-Slapp laws, and Congress is considering legislation to make it harder to file such a suit. The bill, sponsored by Representatives Steve Cohen of Tennessee and Charlie Gonzalez of Texas, both Democrats, would create a federal anti-Slapp law, modeled largely on California’s statute.

State-by-state overview.
Posted by Retiring Guy at 10:33 AM