Will Representatives Bernier, Kulp, and Edming Listen to their Constituents or Be Disposed to Take Their Orders from Speaker Vos?

Clark County is is represented by 3 Republicans in the Wisconsin State Assembly
None of whom, as you see, live in Clark County. 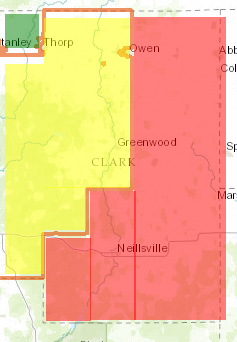 
"If nothing else, it lets (legislators) know you are still around and still watching," Gaier said. "Quite honestly, rural Republicans are going to have to hear from their public schools because they are the ones who determine how far these issues go."

The Clark County School Board Forum is an informal group of school board members who represent 11 school districts in the county and meet about once every two months to discuss topics and issues affecting public schools.


The good news, I suppose, is that Rep. Kulp defeated the favored candidate of the "voucher vultures", i.e., the American Federation for Children Action Fund, in an October 2013 Republican primary for the 69th Assembly seat.