Congratulations and high praise are in order!

Barb Dimick recently announced her retirement, effective February 24, 2012, after working for 35 years at the Madison Public Library, 15 of them as Director.

I am particularly impressed with Madison Public Library's accomplishments in the area library facilities planning and implementation during Barb's tenure as Director.  During my 22 years as the Director of the Middleton Public Library, I worked on two major building projects:  construction in 1989-1990 and a remodeling/expansion in 2003-2004.  It was perhaps the only two times in my professional career where my plate was piled so precariously high that a few portions threatened to fall ignominiously to the floor.  Barb, on the other hand, managed this balancing act without interruption for 15 years!  A most admirable achievement.

Barb was hired as Director at a time when the Madison Public Library was in critical need of strong and visionary leadership.  And that's what she has provided.   I learned  much from her while working on many South Central Library System and Dane County Library Service committees and projects.  We also served together on the WLA Library Development & Legislation back when I was still a little wet behind the ears in this area..  And she was always very gracious and accommodating whenever I made unannounced visits to her office,

Congratulations, .Barb, on your most impressive career, of which I've touched on just a small portion.  And best wishes in your retirement. 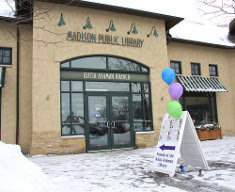 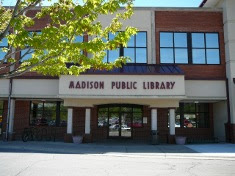 Not sure of exact dates
but I think it fits in here.
(Relocation, expansion)
Lakeview Branch Library 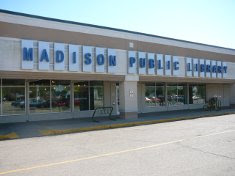 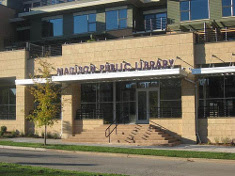 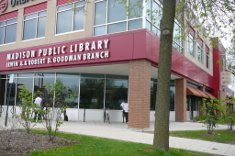 Wonderful summary and tribute to a very energetic lady. I too enjoyed working with Barb and welcome her with open arms to the retirement club. She'll have a great time here with the rest of us.
Pati Chevis

Poor Meadowridge, always neglected. That branch needs some L-O-V-E. Been there lately? The staff deals with crowd control more than librarianship. A new or better building and some new policies to deal with some of the people who frequent it are needed.

Good luck to Barb Dimick. This frequent MPL visitor loves the amazing library system at her disposal. She obviously has a huge role in the success.