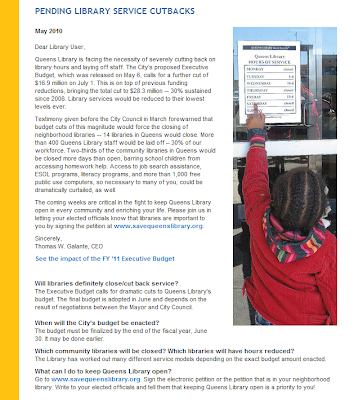 Excerpt: Nearly all city agencies are feeling the pain - 20 fire companies are on the block, as are dozens of senior centers. Some 11,000 city workers could be laid off.

Not even a deserving institution like the city's library system would be spared from the devastating proposed budget cuts. A case in point, the award-winning Queens Library - an essential resource for many thousands of New Yorkers - would be severely slashed.

"Queens Library was recently recognized nationally as Library Journal's '2009 Library of the Year' in part because of the quality, depth and breadth of our programs and services," said Thomas Galante, the library's CEO. "When service hours are reduced by over 40% - as would happen with this budget - nearly every opportunity library users currently have, to improve and enrich their lives, could be lost behind locked doors."

For the 50,000 people who walk through the doors of the Queens Library system each day, this would be tragic.

The city's proposed budget calls for slashing $16.9 million on July 1 from the Queens Library. This is on top of previous funding reductions, bringing the total cut to $28.3 million - 30% sustained since 2008. If this happens, library services in the borough will have been reduced to their lowest levels ever.

The cuts are part of a larger citywide plan to plug a $4.9 billion budget deficit.