But in the Long Run, Action Will Speak Louder Than Words in Sheboygan

Mayor Ryan: The library is an essential part of our community...

So why can't he make say so on his webpage? 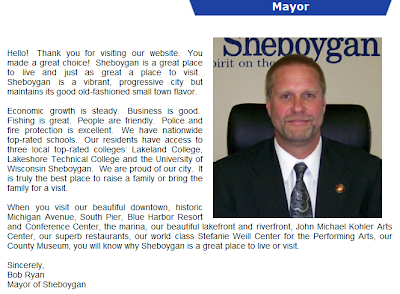 Excerpt: "The governor when he came up with his budget, also said that there would be tools in his budget to help communities in meeting their financial obligations, and this is one of those … by dropping the maintenance of effort for libraries," Mayor Bob Ryan said.

The library is not facing any direct budget cuts as a result of Walker's budget. Whether library funding is cut will be up to Ryan and the Common Council when they lay out next year's budget.

"The library is an essential part of our community, we have one of the finest city-county libraries in the state, it's a great facility. And truthfully we have no intention of the library taking substantial hits in the budget," Ryan said. "But not having that maintenance of effort mandate out there … will give us some flexibility."