The High-Speed Rail Debate in Wisconsin 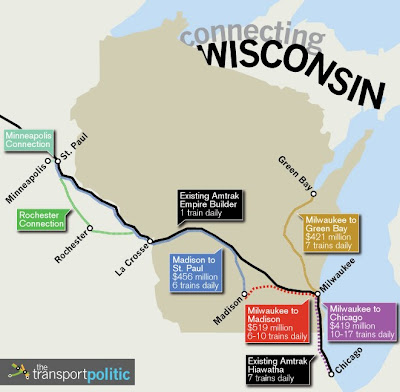 Excerpt: Milwaukee County Executive Scott Walker said Thursday the state should pass up the federal government's offer of $823 million for a high-speed rail line linking Milwaukee to Madison and Chicago - unless millions more for operating the line come with the deal.

That's unlikely, he said. Based on what's known about the high-speed rail plan, Walker said he would reject the federal largess.

The county executive, a Republican candidate for governor, said he might back the high-speed rail idea if "there was a model that could be shown where it was self-sufficient, where the operating costs were covered by the users." He acknowledged that also was unlikely.

In many cases, the inference seems to be that roads somehow pay for themselves.

Not so, says Pew.

Excerpt: Critics of public transportation often cling to the canard that government should not subsidize a transportation option that cannot pay for itself. These naysayers reference “self-sustaining” roads and highways, which receive funding from user-fees – in this case, the federal gas tax. 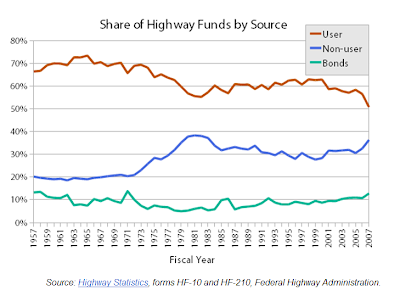 Excerpt: The way America's roads are funded is changing. Revenues that predominantly come from users of roads (“user fees”), including fuel taxes, vehicle registration fees and tolls, pay for a decreasing share of road costs. Taxes and fees not directly related to highway use (“non-user fees”) and bonds are making up the difference.

Using Federal Highway Administration statistics, Subsidyscope has calculated that in 2007, 51 percent of the nation's $193 billion set aside for highway construction and maintenance was generated through user fees—down from 10 years earlier when user fees made up 61 percent of total spending on roads. The rest came from other sources, including revenue generated by income, sales and property taxes, as well as bond issues.

Going back further, the trend is even more pronounced.
Posted by Retiring Guy at 7:22 AM