GET ME REWRITE: Wisconsin DNR takes the air out of Bozo's tires 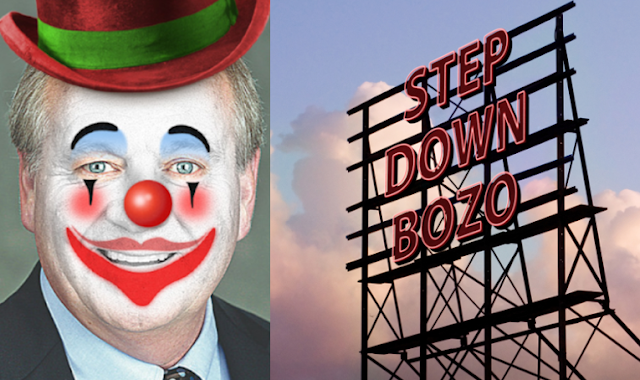 The Natural Resources Board canceled its September meeting Thursday, an action that hasn't occurred for the board in 21 years.

Board chair Frederick Prehn announced the cancellation of the meeting Thursday through his attorney, saying the department would not be proposing any agenda items for the meeting, nor providing staff. Prehn said he decided to cancel the meeting as the board can't function without the department's participation.

Prehn said he believes the decision to not forward any items to the board is related to his continued refusal to step down from his seat on the board, despite the fact that his term expired in May.

Prehn issued a statement Thursday morning saying suggestions that he coordinated or consulted with state Republican elected officials are “not factual.” He said he never spoke to any “currently elected Wisconsin state official in regards to this matter.”

“I did, however, speak with friends and acquaintances as I foresaw holding over could become contentious,” he said. “I wonder if any other political appointee has ever had discussions with friends and/or colleagues, or even a spouse about what is going on in their lives?”

He said he’s confident he can legally hold the seat despite Naas’ appointment and looks forward to the courts resolving the matter.

Frederick Prehn solicited advice from and shared information with several people since May, according to documents obtained by the Milwaukee Journal Sentinel, including Madison lobbyist Scott Meyer, U.S. Rep. Tom Tiffany, and former University of Wisconsin Regent Gerald Whitburn.

Prehn has repeatedly refused to step down from his position on the board after Democratic Gov. Tony Evers announced a new appointee — Sandra Dee Naas — at the end of April. He has continued to chair board meetings and participate in votes since May, as Naas has watched from the public seating area. 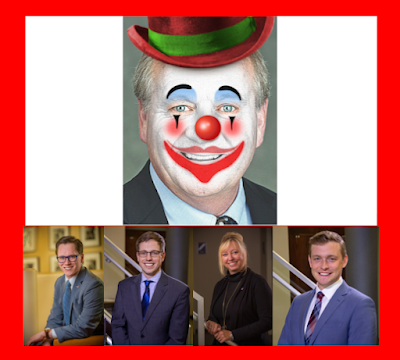 Prehn has received support from Wisconsin Manufacturers and Commerce, the business lobby group, an endorsement that raises questions on its own.

In June, Prehn said he had considered stepping down from the board at the end of his term, but decided to dig his heels in after criticism. He also cited his concerns over leaving the board with big votes coming up, including the quota for the fall wolf hunt season and other water initiatives that have the ability to affect the agricultural community.

Prehn, a Wausau dentist and cranberry farmer, was appointed to the board in May 2015 by former Republican Gov. Scott Walker.

Appointed to replace Prehn was Sandra Dee Naas, who has more than 30 years of experience with conservation, owns an environmental consulting firm and serves as an agriculture and natural resources instructor and FAA advisor at Ashland High School.

Fred donates to GOP and GOP-leaning candidates under a variety of names. 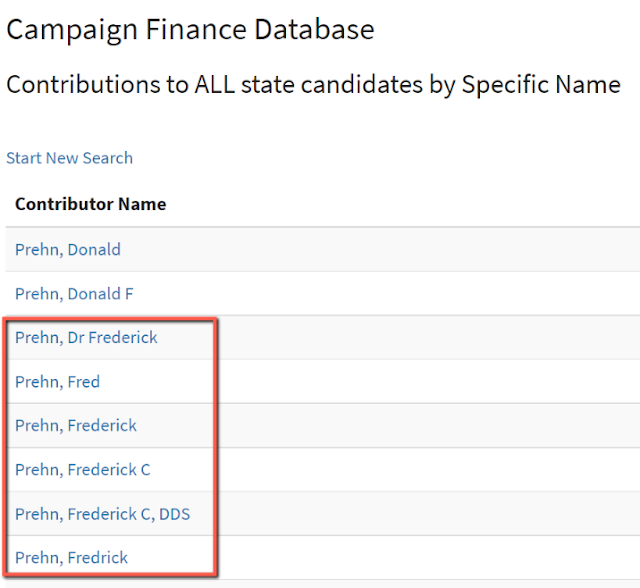 Wisconsin Democracy Campaign (red box added above and below)
A sample 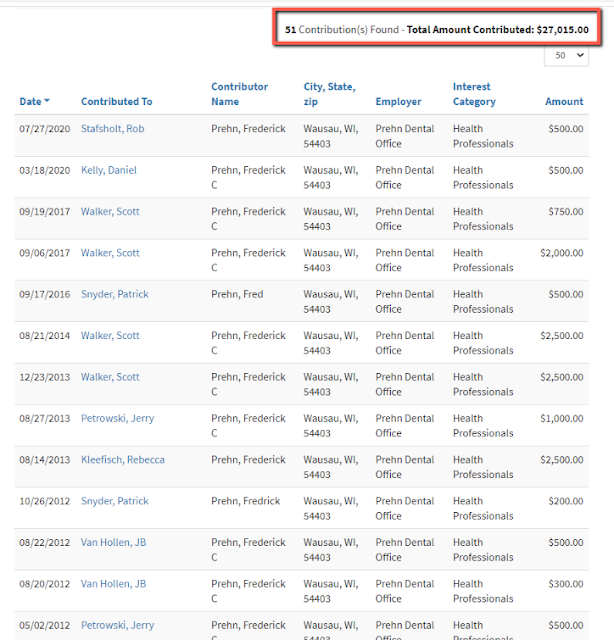 Fred's not doing this on his own.  Probably just following orders.
8/4/2021 update, "Fred Prehn colludes with Wisconsin GOP, insists DNR Board seat is bought and paid for", start here.

Former Gov. Scott Walker, a Republican, appointed Fred Prehn to the DNR board in 2015. The Wausau dentist has served as chairman since 2019.

His six-year term on the board ended May 1; Evers tapped Ashland High School agriculture teacher Sandra Naas to replace him on April 30. He also appointed Sharon Adams to replace Julie Anderson, another Walker appointee whose term ended on May 1. The moves would give Evers appointees a 4-3 majority on the board.

Traditionally, a prior administration’s appointees step aside to make way for their replacements, as Anderson left to make room for Adams. But Prehn has refused to vacate his position, citing a state law that allows him to continue to serve until the state Senate confirms his replacement. Republicans control the Senate and have yet to schedule a confirmation hearing for Naas or Adams.

5/25/2021 update, "Apparently, Frederick Prehn thinks his DNR Board seat is bought and paid for,' starts here

By the way, when the Senate took action on his appointment, they approved him "to serve for the term ending May 1, 2021."

I wonder how many of the senators who voted in favor of Prehn then would have voted "nay" if they knew he would attempt to serve after his term expired.

Although NRB members don't officially represent political parties, it's impossible to ignore the partisan aspects Prehn is injecting into this.

By preventing Nass from joining the board, Prehn is denying Gov. Evers a 4-3 majority of appointees. 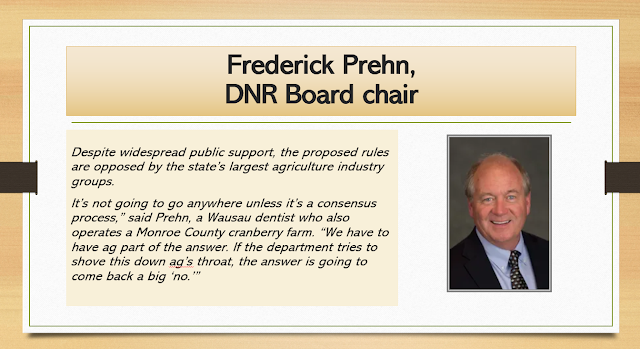 Reported above and below in Natural Resources Board approves work on manure regulations to protect drinking water.  (Madison.com, 12/11/2019) 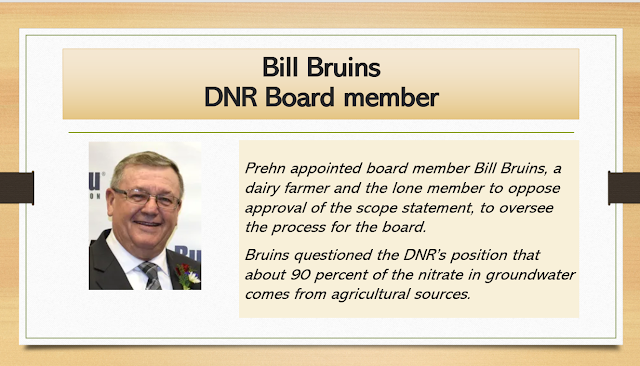 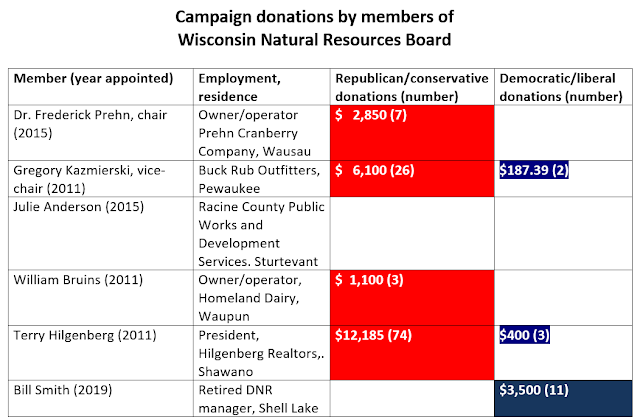 
The DNR’s policy board is scheduled to vote Tuesday on a scoping statement, a broad outline of the proposed rule. Approval of the statement would allow the agency to develop detailed rules, a 30-month process that would ultimately require approval from the Legislature.