It has always been a creaky staircase.

On August 1, 1957, we moved into the St. Paul's Lutheran Church parsonage on East Third Avenue in Warren, Pennsylvania, having spent much of the previous month traveling from Great Falls, Montana, and visiting Dad's relatives in the Midwest.  When we walked into the house, the furniture was already in place, as the Mayflower van had already made its appearance.

The 2-story, World War I-era house includes a living room, dining room, kitchen with a dining nook, and a half bath/utility room on the first floor and 4 bedrooms and a full bath on the second.  Access is provided by two sets of stairs connected by a landing.

I can't remember all of the details of our first day in Warren.  I imagine, however, that we all must have noticed the creaking accompaniment as we made our way up and down the stairs multiple times as we emptied and put away the contents of many boxes of clothes and household goods.

Over the next few years, the creaking stairs provided us kids with a challenge as we sneaked down the upper flight to the landing to peak around the corner when Mom and Dad had company.  I'm sure we weren't nearly as sneaky as we sometimes thought.  And more often than not, the laughter of and amused chatter among the grown-ups made us realize, to our embarrassment, that our cover was blown.

Alternatively, one of us might have been sent to our bedroom for some infraction -- sass, fighting -- and, with no one guarding the door, attempted to float down to the landing.  No matter how lightly the tread, it was nearly impossible not to produce at least one creak.

These memories always come to mind whenever I descend this staircase. 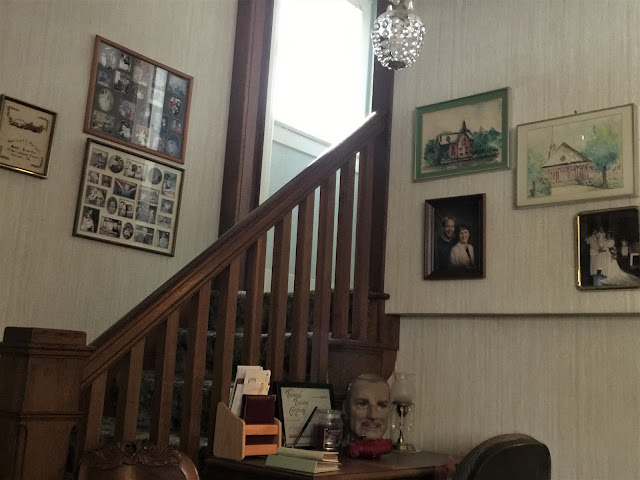 Video and photo by Retiring Guy

My youngest brother lives here now, and as you can probably tell, he has done almot nothing to the house, as far as decor is concerned, since Mom died in 2010 -- the mannequin head from the Printz Company, where he worked during high school, being the glaring exception.