View of front of building from the second floor of what used to be the wing container shop and home ec classrooms. 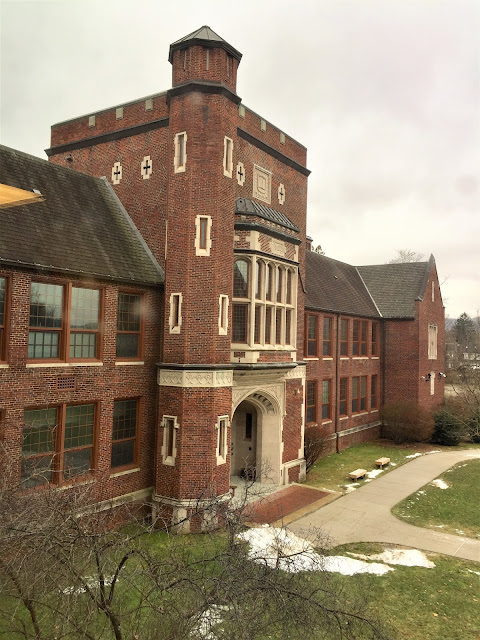 The old main entrance, complete with chandiliers, looks pretty much like it always has.  (The doors at right lead to the gym.) 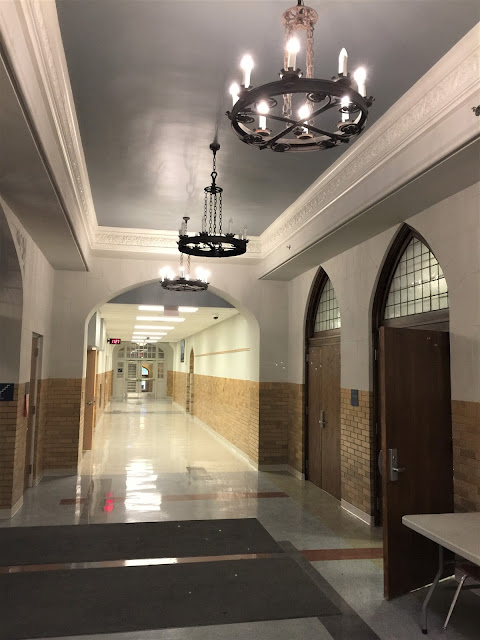 First floor hallway along the Conewango Creek side of the building, a longer perspective than when I attended from September 1962 to June 1965. 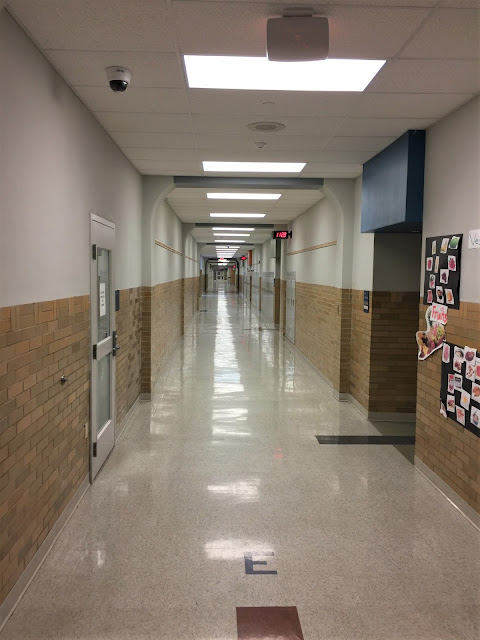 A view of what's left of the courtyard and the exterior north wall of the former band/chorus room. 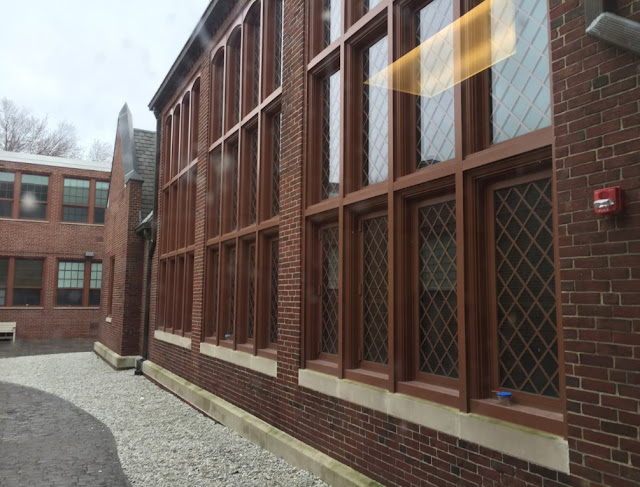 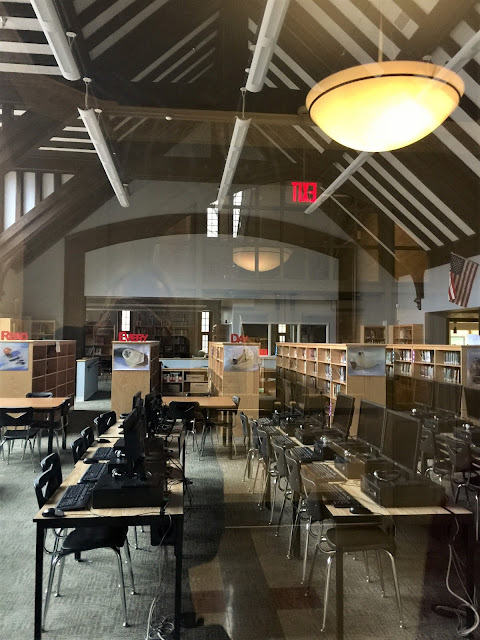 The original cafeteria was a large, open space with rows of windows along the south and west walls that provided a panoramis view of the Conewango Creek. 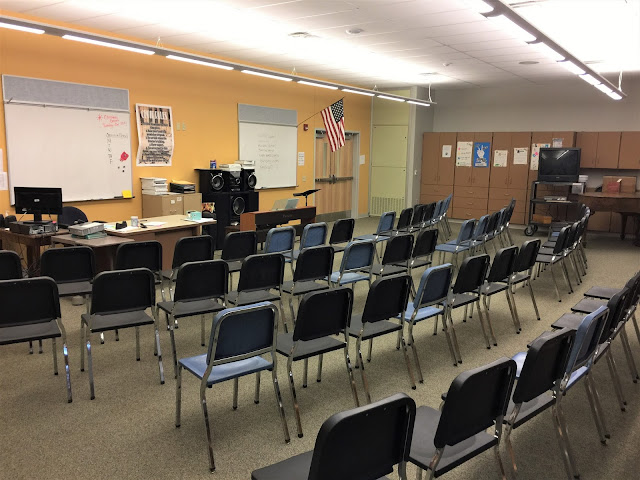 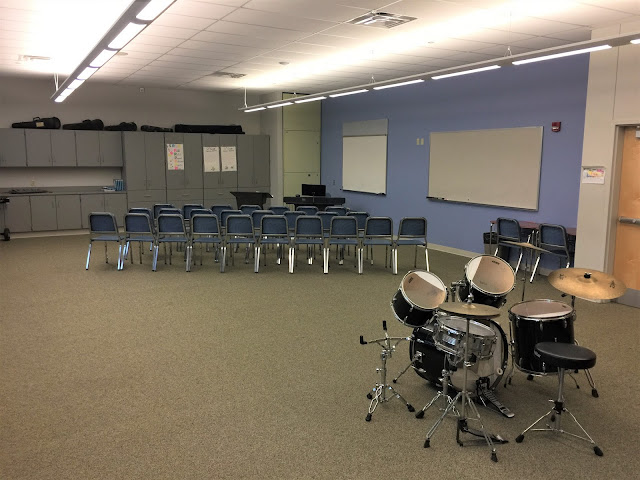 The auditorium is little changed. 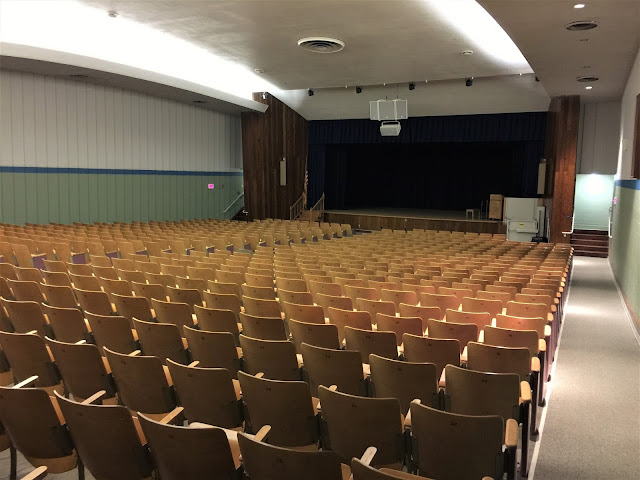 The office has moved from just to the right of the old main entrance to the east side of the building, near the auditorium. 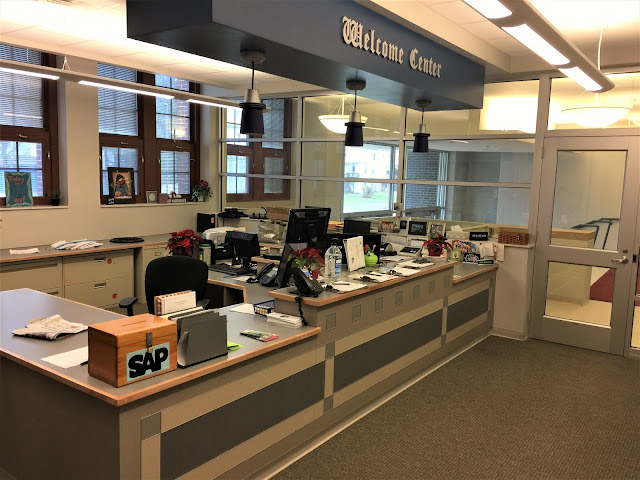 The stairwells to the second floor also remain  basically unchanged. 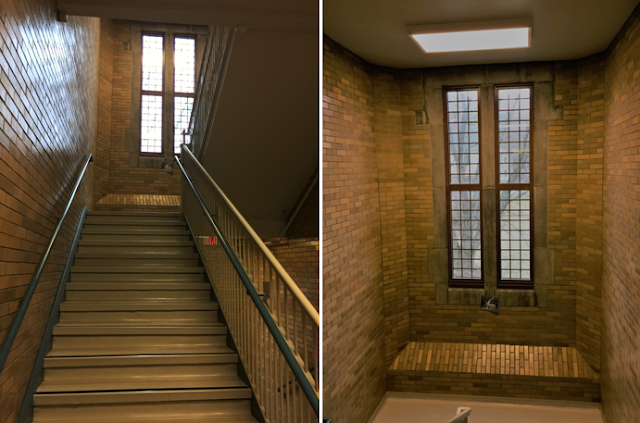 The original library space is now a computer lab. 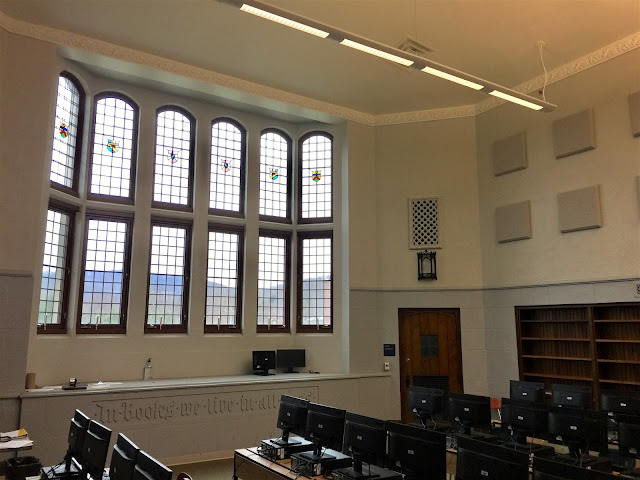 As is the room where Mr. Kurz taught drafting for many years. 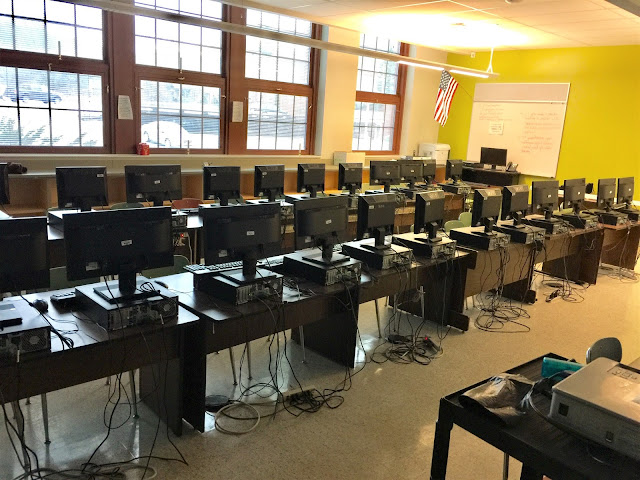 Thanks to my sister-in-law, a Beaty faculty member, for a most enjoyable tour.


The following, "Beaty Middle School:  On the Banks of Conewango", was originally published at Retiring Guy on May 15, 2009.

First off, it's now called Beaty Middle School. When I attended during the years 1962-1965, the student body averaged 1300 7th, 8th, and 9th graders. The grade range is now 5th through 8th, and the average student population has slid to 800, I'd guess.

Thanks to 7th- and 8th-grade chorus, I can still recite the lyrics of the first verse and chorus of Beaty's insipid Alma Mater.

On the banks of the Conewango, 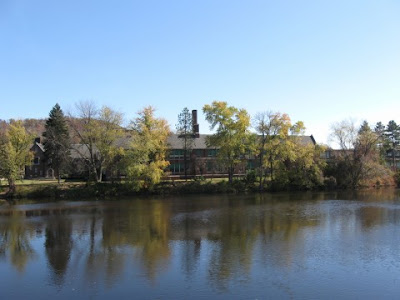 Just above the dam, 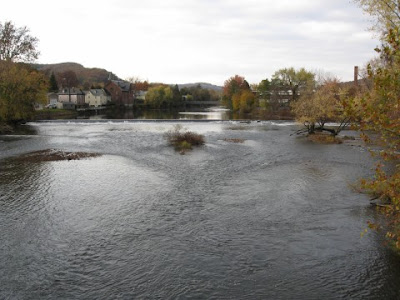 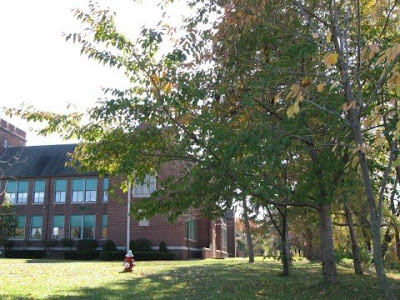 Stately and so grand. 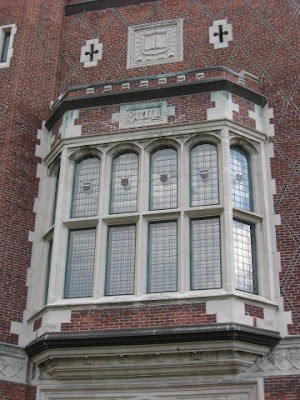 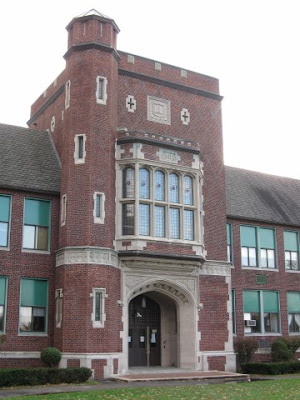 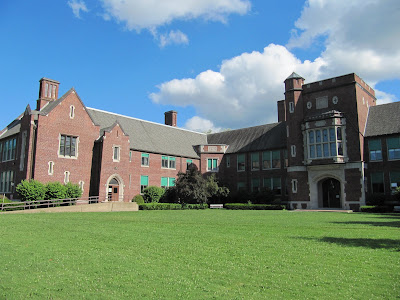 CHORUS:
True to Beaty we will ever
Loudly sing her praise.
Hail to Beaty Junior High School
Hail to thee always. 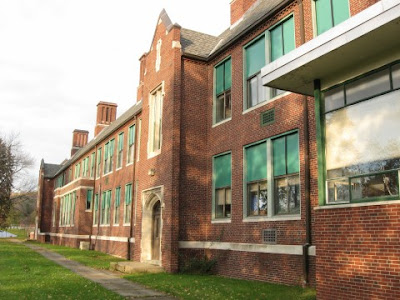 After two failed referenda -- 1923 and 1925 -- the Beaty family provided the land on the north and south sides of Third Avenue along the Conewango Creek for the school. Construction started in the spring of 1929 and was completed in time for the 1930-31 school year. (The school is on the south side of Third Avenue; a track, football field, tennis courts, and playground are on the north.) 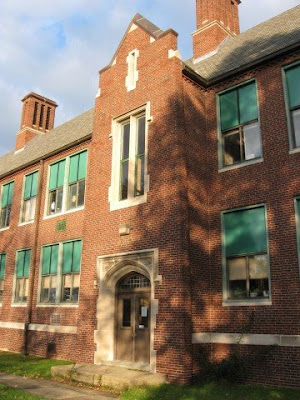 David Beaty, the family patriarch, built the residence pictured below in the early 1870s. What you see is about half of the original structure. In 1939, his son, David Beaty II, demolished the front section, which included a four-story tower. He also replaced the original mansard roof with a pitched one. (To get a sense of how the original house looked, think "The Munsters", before dilapidation set in.) 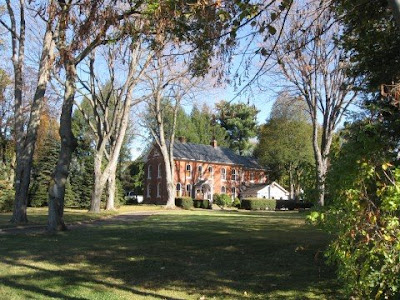 Walter Beaty, one of the patriarch's grandsons, built the brick-and-stone Georgian mansion (shown below), complete with semi-circular driveway, in 1924. 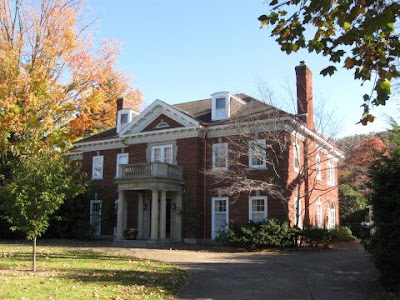 The next picture presents a timeline, from far to near, of Beaty's growth: the original 1930 structure, a seamless 1937 addition, a sleeker 1953 addition, and a seamless 1965 addition. (At 520 students, the class of 1975 was the largest to go through the Warren public school system.) 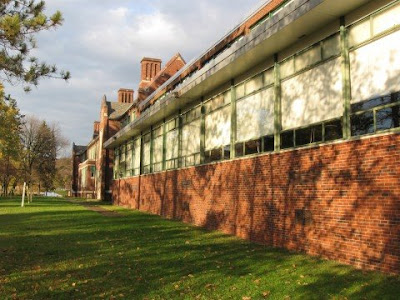 A view below of the original section and a classroom portion of the 1953 addition. 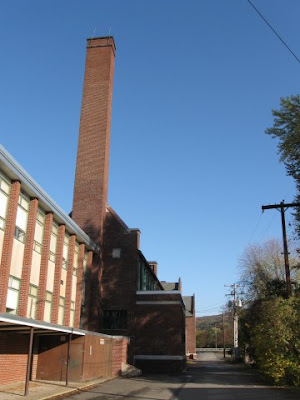 In addition to the Alma Mater, I can still reel off my 7th-grade schedule.

3rd period. Room 219. Chorus on M-W-F. Miss Mathis, who became Mrs. Peterson before the start of 8th grade, without any noticeable effects. Gym on Tu-Th with old-as-the-hills Mr. Hutchins.

7th period. Room 211. Math. Mrs. Hubbard, who was probably in her 30th year of teaching at the time. If not my favorite, she was, by far, the best teacher I had during my Beaty years.
Posted by Retiring Guy at 12:53 PM

Love your blog!
I'm Miss Popielski's son, Mark.
She's retired now and doing well, but her commitment to teaching inspired me to work in that field.
Thank you for remembering her!

I suspect she doesn't remember me, but tell her how much I appreciate her commitment.