To 'take a deep breath'. 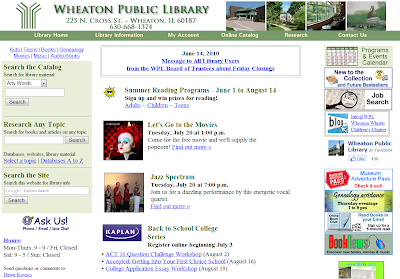 Excerpt: Some Wheaton Public Library board members could be replaced because of the ongoing dispute between their panel and the city council.

Because library board members are appointed by Mayor Michael Gresk and approved by the council, the mayor could pick new trustees when three of the nine seats are up for reappointment.

As a result, library board President Colleen McLaughlin said she's concerned either Stacy Slater or Carri Peterson won't be reappointed now that their terms are set to expire. Board member Martin L. Kyle retired earlier this month.

Several city council members made it clear they won't support the reappointment of any library board members who supported a plan to close the library on Fridays.

Excerpt: Wheaton City Council members are prepared to use their home-rule power to force the library to reverse its decision to close Fridays.

In a 4-3 vote, the council Monday directed staff members to draft a law that, if approved next month, would require the Wheaton Public Library to be open a six days a week during the summer and all seven days during the school year. The ordinance also would require the library to operate a minimum of four hours on days it's open.