Still Looking for an Audience in SCLS 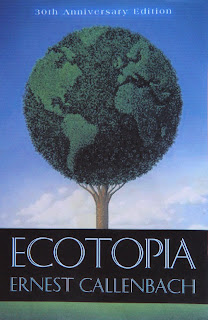 Excerpt:
Sometimes a book, or an idea, can be obscure and widely influential at the same time. That’s the case with “Ecotopia,” a 1970s cult novel, originally self-published by its author, Ernest Callenbach, that has seeped into the American groundwater without becoming well known.

The novel, now being rediscovered, speaks to our ecological present: in the flush of a financial crisis, the Pacific Northwest secedes from the United States, and its citizens establish a sustainable economy, a cross between Scandinavian socialism and Northern California back-to-the-landism, with the custom — years before the environmental writer Michael Pollan began his campaign — to eat local.

The rediscovery of this book seems to be slow in coming to Wisconsin. Current status in LINKcat: 3 copies, of which 1 is checked out, 1 is damaged, 1 is "in library", perhaps waiting to be placed in delivery for the 1 hold that's been placed on it.
Posted by Retiring Guy at 10:37 AM