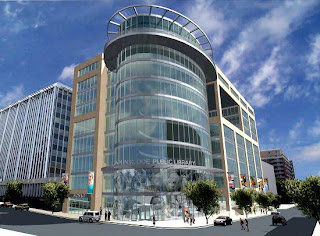 Excerpt: Terrence Wall said he if offering "a library of the future" and that is he ready to move forward. (But perhaps not until after he reconsiders the library's name. This building would be located on the site of the current library -- W. Mifflin and Fairchild. Brief description: 380,000-square-foot, mixed-use building to include retail space, parking, and hotel or office space.) 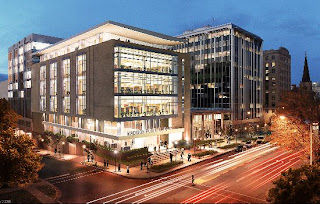 Excerpt: Fiore executive vice president Bill Kunkler said their proposal will be a symbol for the city. "This is a library as a library should be." (This is the West Washington/Henry Street location, two blocks west of the Capitol. Brief description of proposal: 6-story, 104,900-square-foot, free-standing glass and stone structure.)

My druthers? I have to go with the free-standing (Fiore) design. Why? A red flag was raised when I read the following in a June 5 Cap Times article, "New library has been on city's mind for years." This spring, local developer Terrence Wall proposed tearing down the downtown library in the 200 block of West Mifflin Street and replacing it with a nine-story, $45 million building. That development would house a new and bigger library, several floors of private office space and retail on the ground floor. (My emphasis.)

You have to admit, though, that both are stunning designs.
Posted by Retiring Guy at 7:56 AM