Autonomous flying pods: Transit X has lots of work to do yet


The planning board said it would continue to monitor Transit X's progress and might look at its proposal again when it has more evidence that the project is realistic. But for now, the city will keep its focus on developing Bus Rapid Transit.

"I would never say something’s not possible because it’s great to think about different ways of doing things, but just this particular model at this time is unproven," said Ald. Keith Furman, 19th District. "It just doesn’t seem realistic, unfortunately."


As a follow-up to Alder Furman, I offer two screenshots from the above video. 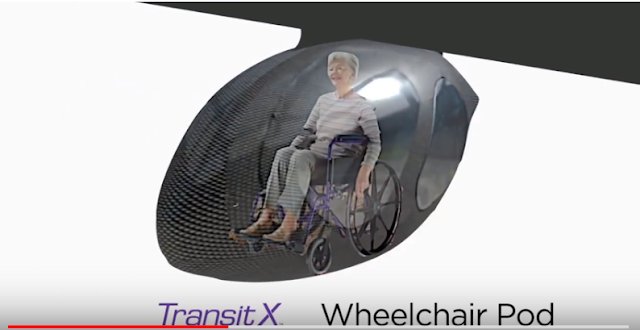 How does the woman in a wheelchair access the pod?


Stanley, an MIT graduate, has designed a system of "pods" that glide along a track suspended 14 feet above the ground. The system is solar-powered, and Stanley says it's also eco-friendly. The lightweight pods, made out of carbon fiber, are whisked along at 45 mph by batteries and a motor. The pods can carry four to five people, or cargo.

Stanley said he plans to demonstrate a working prototype in Leominster, Massachusetts, on Monday.

"It's 'The Jetsons,' just with a track," Stanley told Eyewitness News.

Sounds too good to be true, if you ask me.

Here's a clip from the Leominster demo.