Briefly, here's how Mayor Jean Stothert and the Omaha Public Library Board of Trustees reached this impasse.


When deciding on the city budget for 2015, the mayor and library supporters sparred over Stothert’s proposal. Eventually the City Council sided with the libraries and increased materials spending.

But that and other matters, Stothert said, raised questions about the Library Board’s authority over city money that goes to the libraries.


Although not specified in the World Herald article, I suspect Nebraska Revised Statutes 51-207 is the primary area where interpretations differ.

In the slide below, I also share the language found in the Wisconsin State Statutes from the "powers and duties" (of library boards) section.  Note the inclusion of the verb "appropriated", which is not found in the corresponding Nebraska library law.  I can see why Mayor Stothert thinks she has a leg to stand on here. 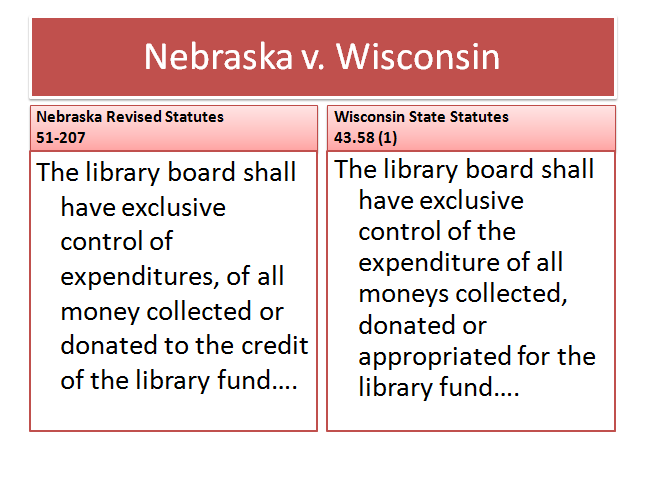 If I were a member of the Omaha Public Library Board of Trustees, I'd point out the following:


All taxes levied or collected and all funds donated or in any way acquired for the erection, maintenance, or support of any public library shall be kept for the use of the library separate and apart from all other funds of the city, village, county, or township, shall be drawn upon and paid out by the treasurer of such city, village, county, or township upon vouchers signed by the president of the library board and authenticated by the secretary of such board, and shall not be used or disbursed for any other purpose or in any other manner.

But then I'm not a lawyer.