True or False: The Internet Has Made Us Smarter 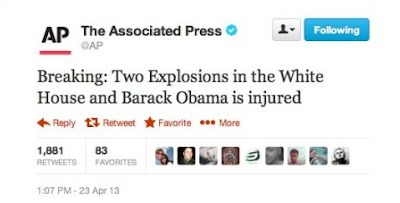 AP's Twitter account was hacked by the Syrian Electronic Front on Tuesday, April 23, 2013.  The above tweet caused the Dow Jones Industrial Average to plummet 150 points, wiping out $136,000,000,000 (billions), in minutes.  The loss was erased once Wall Street's highly-educated group of workers came to its senses, perhaps courtesy of the due diligence of a librarian.  (Well, it would add a nice flourish to the story.)