The Iowa Straw Poll, a Slow Death by Many Small Cuts


It's a blow to the Republican Party of Iowa, which decided to go ahead with this year's event despite years of criticism and repeated calls for its death from outside and inside Iowa. Last week, the Register reported that another leading GOP contender, former Florida Gov. Jeb Bush, had decided to bypass the Iowa Straw Poll. 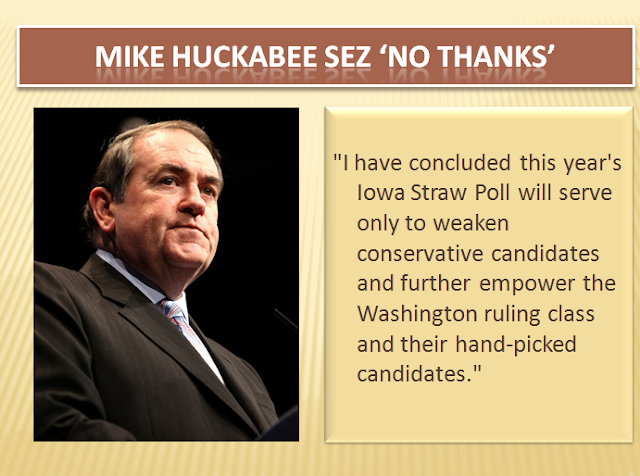 More than 2 years ago, Iowa Republican Governor Terry Branstad said the straw poll "has outlived its usefulness".   A few days ago, he added that it "lacks relevancy".

Many in the GOP probably want to avoid the embarrassment of the 2012 straw poll results.

Considering the fact that an alleged moderate candidate like Mitt Romney received just 3.4% of the vote in 2012, I don't think Huckabee is being upfront with us about his reasons for bowing out.