Let's See What Glenn Grothman Has Been Up To Lately

Making campaign ads, for one.

An earnest, deep-voiced reading, with frequent notes of dismissiveness.  "Washington has plenty of do-nothing politicians, spineless guys more worried about cocktail receptions than fixing our exploding national debt and pulling our country out of a ditch.

"But not Glenn Grothman.

"You see, Glenn Grothman's not the kind of guy who gets invited to the White House for tea and cookies.  That's because Glenn's a proven conservative leader, taking on liberals, cutting income taxes, writing pro-jobs bills, and cleaning up welfare my making it illegal to buy junk food with food stamps.

"Term limits?  Glenn Grothman is the first candidate to pledge to serve no more than 10 years.

"So if you want another weak-kneed, go-along-get-along Congressman, then vote for other guys. But if you want a proven conservative who'll tell the Washington power brokers that enough is enough, vote Glenn Grothman for Congress." 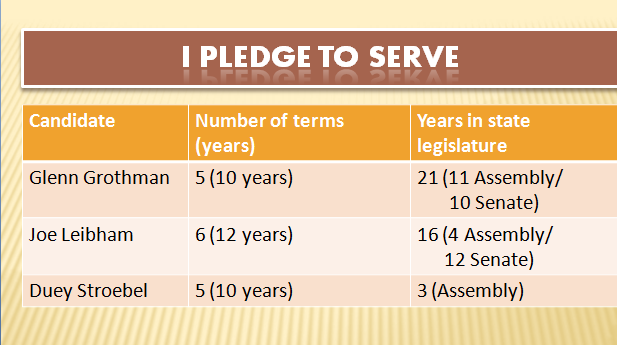 It loses all meaning when you've already served 21 years in the state legislature.

Clearly, "common-sense bills" and "Grothman" should never be used in the same sentence.  (7/9/2014)
Two career politicians pledge limited service in the U.S. House of Representatives.  (7/8/2014)
Glenn Grothman, Affirmative Action, and the demographics of Wisconsin's 6th Congressional District.  (4/28/2014)
Posted by Retiring Guy at 8:30 AM