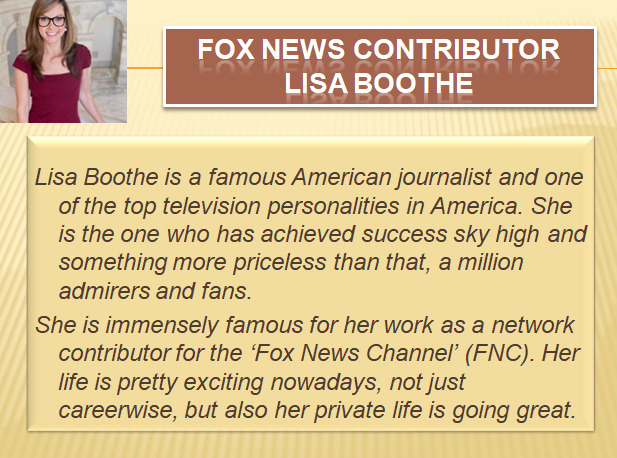 Swooning found at Lisa Boothe’s mysterious relationship has been revealed. Not single anymore, might get married soon!  (Married Biography, 5/16/2019) 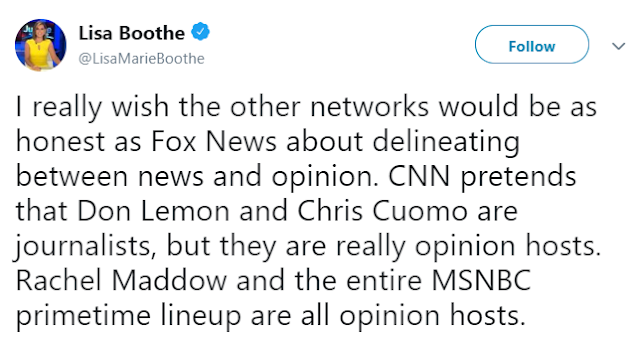 
"I'm watching now and screaming," one Fox News personality said in a text message to CNN as the person watched their network's coverage. "I want to quit."

"It is another blow to journalists at Fox who come in every day wanting to cover the news in a fair and objective way," one senior Fox News employee told CNN of their outlet's coverage, adding that there were "many eye rolls" in the newsroom over how the news was covered.


Every morning, Donald Trump sets aside several hours for what aides have dubbed “executive time”. But he isn’t reading policy papers or intelligence briefings. He’s glued to the TV: specifically, to Fox News.


For 10 years, Ralph Peters regularly appeared on Fox News to offer military analysis and insight as one of the cable network’s reliably conservative commenters.  But he quit in March in disgust.

9/6/2017 update, "The myopic, fascistic Lisa Boothe is extremely uncomfortable with the thought of a successful black man", starts here. 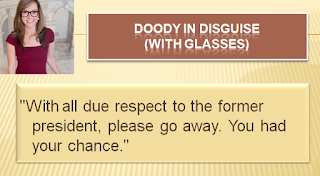 And, of course, no one is surprised. 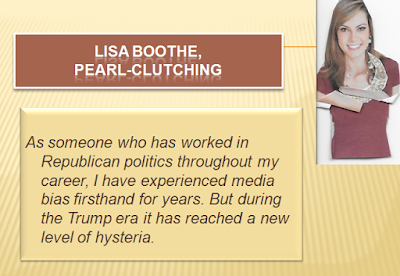 Actually, Lisa, as we've known all along, it's you that needs the corrective lenses.  Big time!


1/11/2017 update, ": Dear Lisa, Time to schedule an appointment with your ophthamologist", starts here. 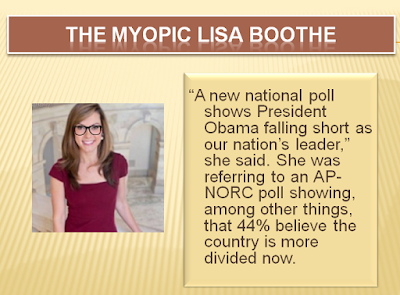 Reported at Outnumbered Pre-Attacks Obama’s Farewell Address Because He Might Criticize Trump.  (NewsHounds, 1/10/2016)

Well, Lisa-Bisa, Quinnipiac has a much different tale to tell.  Obama's approval rating is 18 percentage points higher than Господин Trump's. 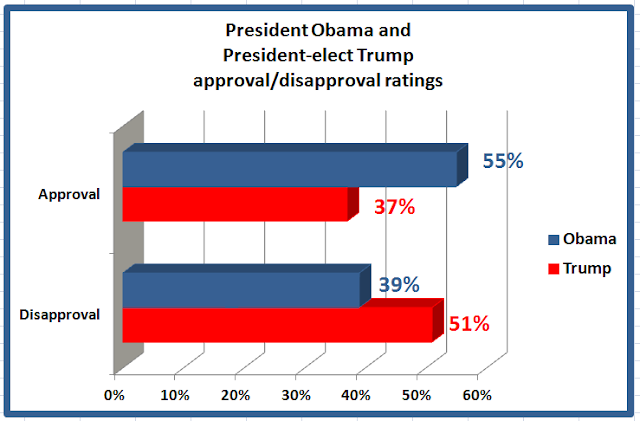 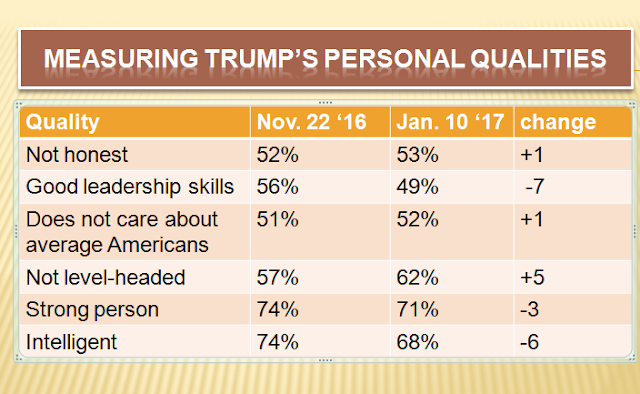 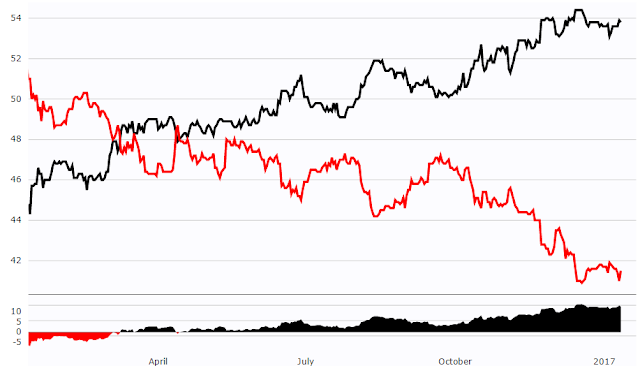 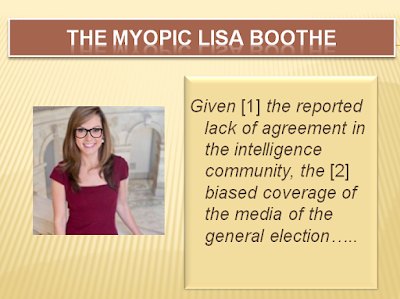 [1] Lisa pulls the trigger too soon.

Quoted in On Fox, Lisa Boothe Lashes Out At “People Like Beyoncé” Who Push The “False Narrative” Of Racial Bias In Police Shootings.  (Media Matters, 8/30/2016) 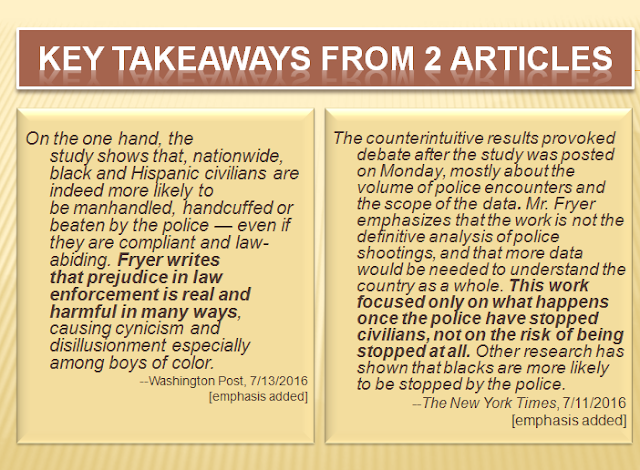 Related reading:
An Empirical Analysis of Racial Differences in Police Use of Force, by Roland G. Fryer, Jr.
How a controversial study found that police are more likely to shoot whites, not blacks.  (Washington Post, 7/13/2016)
Surprising New Evidence Shows Bias in Police Use of Force but Not in Shootings.  (The New York Times, 71/1/2016)

The best advice:
Be Wary of Studies That Deny Racial Bias in Police Shootings.  (Huffington Post, 7/27/2016)


Clearly, nothing here has been 'dispelled as fiction'.  Unfortunately, there is little hard data to indicate whether racial bias plays a role in shootings like these. There's still no federal database about how widespread police violence is, nor any  breakdown of which demographic groups bear the brunt of that force.  In the absence of statistics, each new study on police violence is treated like breakthrough research, when it's actually a single data point in a field of study in its infancy. 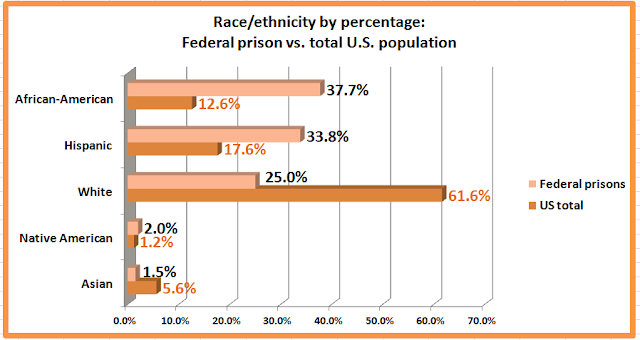 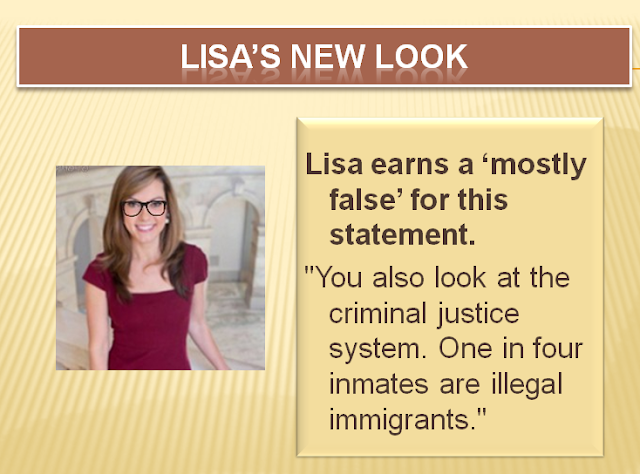 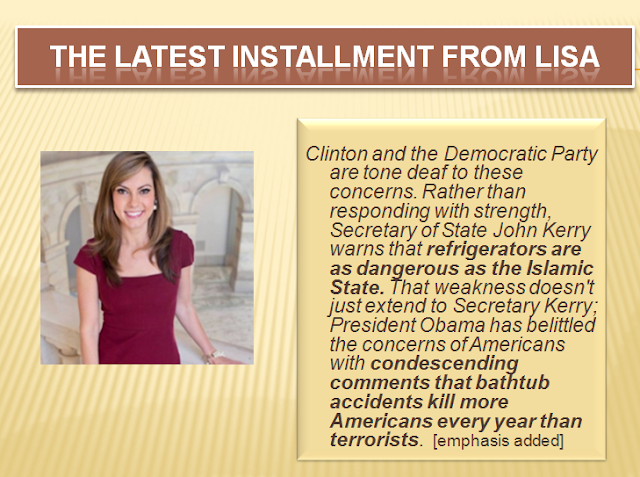 About that refrigerator remark.


He was talking about the critical importance of responding to climate change.  "(On Thursday), I met in Washington with 45 nations - defense ministers and foreign ministers - as we were working together on the challenge of [ISIS], and terrorism," Kerry said. "It's hard for some people to grasp it, but what we - you - are doing here right now is of equal importance because it has the ability to literally save life on the planet itself."

A catastrophe caused by climate change is seen as the biggest potential threat to the global economy in 2016, according to a survey of 750 experts conducted by the World Economic Forum. The annual assessment of risks conducted by the WEF before its annual meeting in Davos on 20-23 January showed that global warming had catapulted its way to the top of the list of concerns.


And about those bathtub remarks.  (Note that she accuses Obama of condescending comments.)

But he doesn't know for sure.  “Americans are more likely to die in a car crash, drown in a bathtub or be struck by lightning than be killed by a terrorist,” wrote the Times’ Peter Baker on Monday. “The Islamic State does not pose an existential threat to the United States.”

The Times put this opinion forward at a time when a majority of Americans admit to worries that they or a member of their family will be the victim of a terrorist attack.

Baker believes President Barack Obama shares his opinion but is not politically able to say so during his final State of the Union address on Tuesday.  [emphasis added] 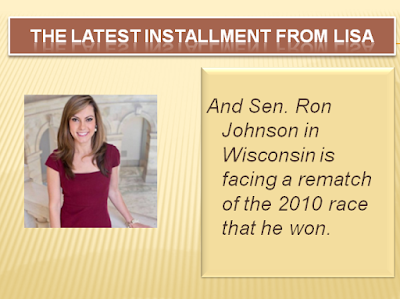 As opined in 'Never Trump' movement should shift focus to Senate.  (Washington Examiner, 6/15/2016)


6/2/2016 update, "Woman who treats a job like a one-night stand attempts to smear distinguished resume of Elizabeth Warren", starts here. 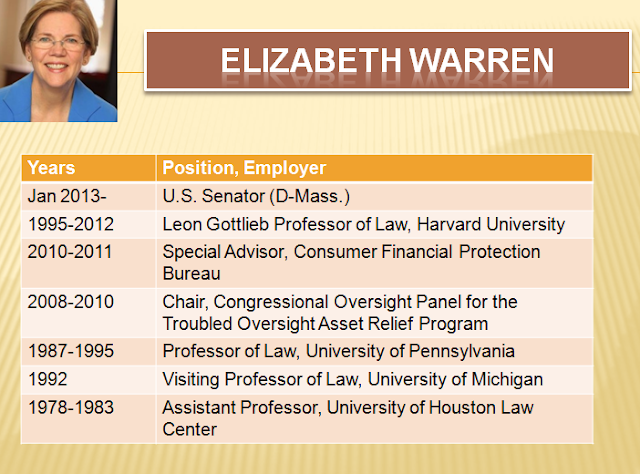 The Washington Examiner is owned by the conservative, reclusive, and very rich Philip Anschutz.  According to Forbes, he ranks #108 on the world's list of billionaires.

Well, at least we know that High Noon Strategies is taking up all of her time. 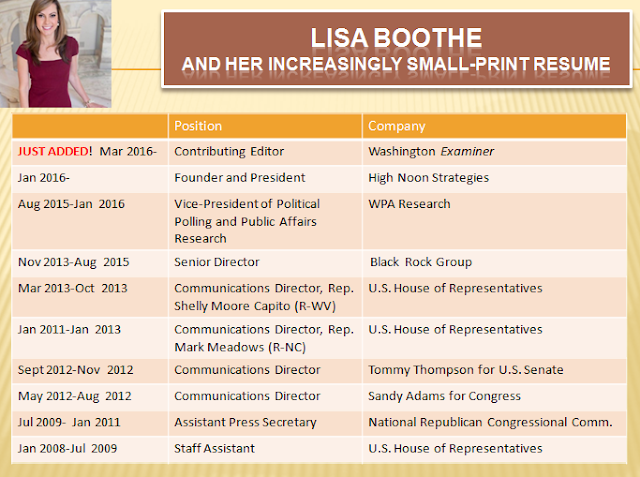 I really don't understand why this post continues to be so popular. In its original form, it was nothing but a toss-off, one I figured was destined for instant oblivion.

Little did I know.

Since it continues to attract attention, I feel obligated to keep it current.

So I must announce that Lisa is no longer Senior Director at Black Rock Group.   In fact, she's in her second position since that gig. 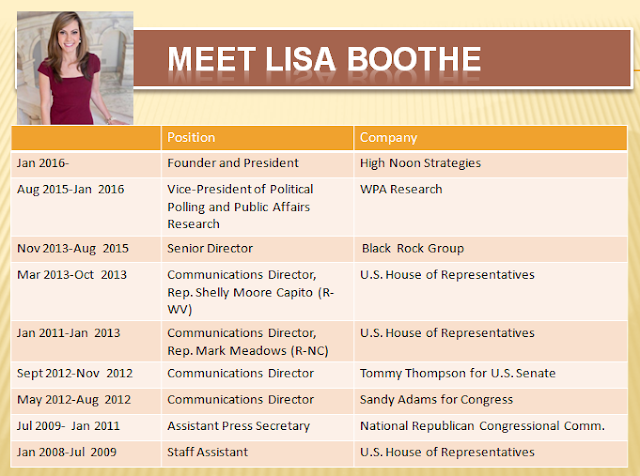 The "cat's meow" was used with a heavy, clanging sense of irony.

Merriam-Webster's citation files show that its first known use occurred in 1926. 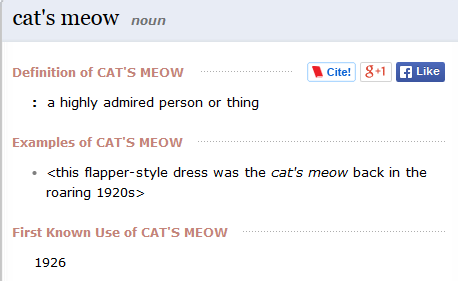 And as for Lisa Boothe. 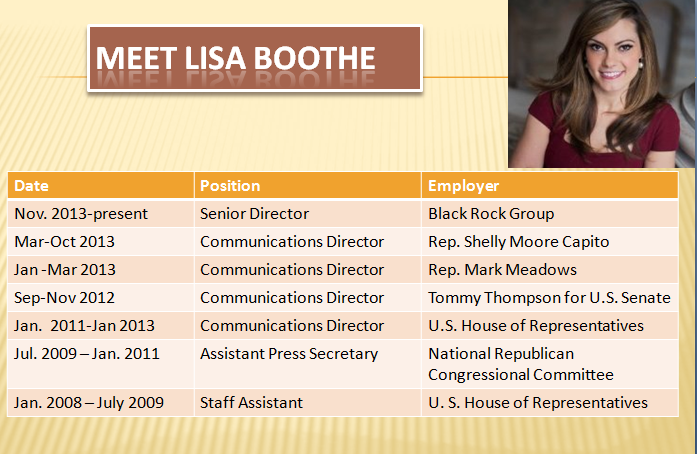 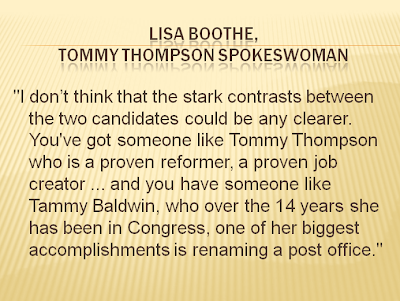 Postscript:  And how did that go, Lisa?

Stone cold babe she is

But maybe it is all about the money. But then again that would make her a prostitute. Huh?

Dan Maynard needs a lot of help with his dream of obtaining a GED...need I say more.

It is tough for the left to understand how a woman can be both beautiful and correct. Since 90% of those on left are hard to look at and wrong.

Lets be honest here, Elizabeth Warren looks like a 10 year old boy and supports a belief system the same as the Nazi's(Socialism)that has killed millions. Gets caught in a lie about claiming to be native American to get money and jobs! Then goes on to say racist things like "they all have high cheek bones". Sound familiar? A lot like what the Nazi said about Jews!
As someone who really is part native American and has never used it to get anything I find her sickening!

Lastly there is a difference between getting a job and doing a job! I have heard her greatest allies interviewed. When asked what she has accomplished in her career they say umm or well I'm sure there is something. There isn't! Sound familiar again... Hillary!

Not a republican or democrat just someone who hates lies! And no I'm not a trump guy either but may vote for him since he has actually accomplished something in life for real! Not just showing up for work!

lisa is smart and clearly communicates her point. Yes she is a babe with a brain.