Time and Money Running Out for Des Plaines Bookmobile 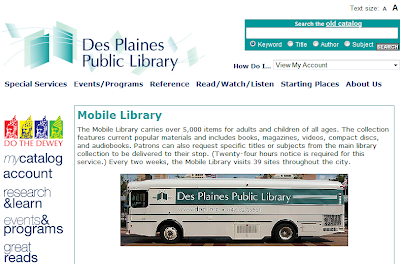 Excerpt:  It costs Des Plaines $132,660 annually — roughly 2 percent of the total library budget — to operate the mobile library, housed in a 36-foot-long bus carrying a collection of roughly 13,000 items. The collection includes popular fiction and nonfiction books for adults and children, music CDs, audiobooks, DVDs and magazines. Des Plaines has been providing the service for 14 years.

The bus makes 40 stops monthly during the school year, and 32 during summer, hitting each stop twice a month. The bookmobile is used mainly by youth, who make up 65 percent of checkouts.

Yet the bookmobile is more than just a mini library on wheels. The jobs of three part-time staff members — collectively earning roughly $81,000 annually in salary and benefits — are tied into its operation, Rozovics said.

Those employees will likely be let go.