Albany Public Library: If at first you don't succeed..... 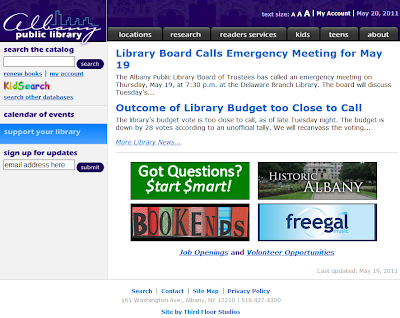 Two days after residents rejected the library's $9.56 million proposed 2012 budget, which would have come with a 25 percent property tax increase, the board of trustees agreed Thursday to seek a second vote on what will likely be a reduced spending plan.

But what that budget will look like is not yet clear.

And while the exact date has not been set, the vote will likely take place the week of July 12, giving trustees until next week to pare down the spending plan while also meeting a 45-day voter-notification requirement and the need to have the library's tax levy -- or the amount of the budget that comes from taxes -- settled by mid-July.