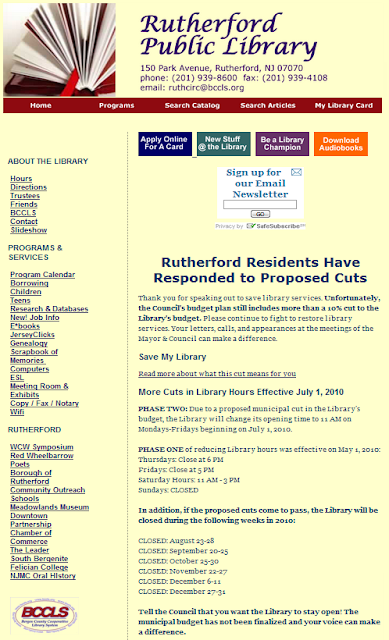 Excerpt: Even as its supporters continue to fervently lobby the Rutherford Borough Council for more money, the Rutherford Public Library is bracing for budget cuts. The library’s board of trustees has prepared an impact statement describing how it will cope if the borough reduces its funds by a certain percentage.

A 30-percent reduction in borough funding, as proposed by the council in its introduced budget, would threaten the library’s position in the Bergen County Cooperative Library System, by reducing its hours below state-mandated levels, the impact statement indicates.

“I never thought in my career that I would see the day where I was begging for a 10-percent cut,” said Library Director Jane Fisher at the Tuesday, July 13 meeting of the borough council. “But, I am begging on behalf of your residents, and your borough workers.”

State law requires that libraries in municipalities of Rutherford’s size be open 45 hours per week, including some weekend and evening hours, according to the board’s report. With a 30-percent reduction in municipal funding, that would not be possible.
Posted by Retiring Guy at 4:28 PM