The Value of School Librarians 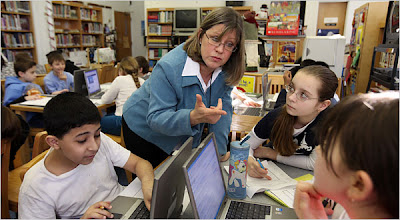 Excerpt:
Ms. Rosalia, 54, is part of a growing cadre of 21st-century multimedia specialists who help guide students through the digital ocean of information that confronts them on a daily basis. These new librarians believe that literacy includes, but also exceeds, books.

Growing cadre? Unfortunately, from reports that I read in journals and blogs and hear from school librarians, we're moving in the opposing direction. The cadre is shrinking. Here are some specifics from the early part of this decade. Imagine how long the accumulated list of cuts are in 2009.

The article does make note of the fact that just 1/3 of New York City's public school have certified librarians.

And that other problems exist. Before Ms. Rosalia arrived, the library was staffed by a teacher with no training in library science. Some books in the collection still described Germany as two nations, and others referred to the Soviet Union as if it still existed.