Planning for my Property Tax Savings

The amounts that property taxes would be lowered on an "average" home in Walker's $100,000,000 in property tax cut plan.  Compared with a bill I paid yesterday evening. 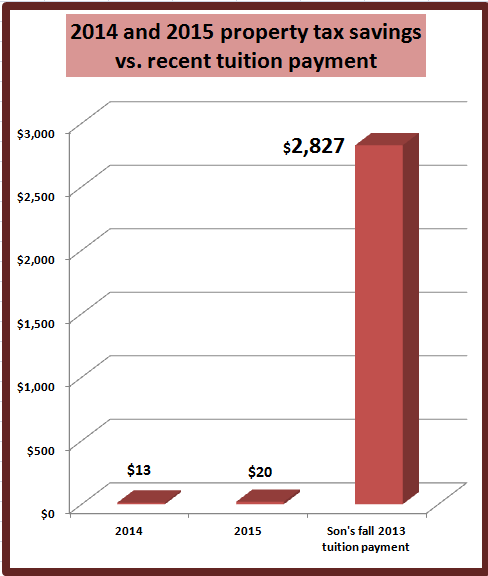 Hey, every little bit helps, I suppose.  Next year's savings can be put toward the cost of a ticket at the Star Cinema IMAX, where we saw Gravity on Saturday night.    (I took too much stock in the rave reviews, which raised my expectations sky-high, and walked away feeling underwhelmed -- and further convinced that 3D is more of an intrusion (take that literally or figuratively) rather than a necessity in film-making.

Stayed tuned for this Legislative Fiscal Bureau report:   The stronger finish to the 2011-13 two-year budget period will put the state in a slightly better position for the next state budget than the $545 million structural deficit previously projected by the fiscal bureau. But the property tax relief could add to the structural deficit — when revenue projections fall short of expected expenditures during a given budget cycle. Lang said he would have an updated projection Tuesday on the fiscal landscape lawmakers will face heading into the 2015-17 budget.
Posted by Retiring Guy at 9:03 AM