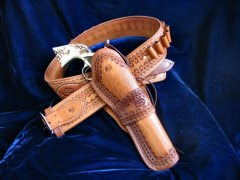 Link to November 20 knoxnews.com post, "Gunning for a library book? Better not bring your weapon". (via LIS News)

Excerpt: After an incident two weeks ago at its Fountain City branch, the Knox County Public Library system has posted signs prohibiting handguns and any weapon at its branches.

Such a sign has been posted for decades at the Lawson McGhee Library in downtown Knoxville, but not at the 17 branch libraries, said Larry Frank, director of the library system.

Frank said he wrote a memo to Knox County Law Director Bill Lockett about the handgun policy in libraries after a man came into the Fountain City library with a “visibly holstered handgun.”

“Although the patron questioned library policies, he was not disruptive in any way and did not behave in any manner that could otherwise be perceived as threatening,” Frank wrote. “The situation did make members of my staff and other library patrons uncomfortable.

“I’m appalled that someone would even consider it. It was only one incident, and it was just the idea. We do not allow guns in the library, no firearms or any weapon in the library.”
Posted by Retiring Guy at 7:17 AM

The action to post signs against the open carry of handguns at Kentucky libraries appears itself to be unlawful, or at least not enforceable. The Kentucky legislature generally preempts localities from enacting gun carry bans and the state supreme court has upheld "open carry" as constitutionally protected. See more at http://www.opencarry.org/ky.html

I have not looked at the Kentucky law but most states always exclude public buildings - City, County, State gov., and schools - for either open or concealed carry.