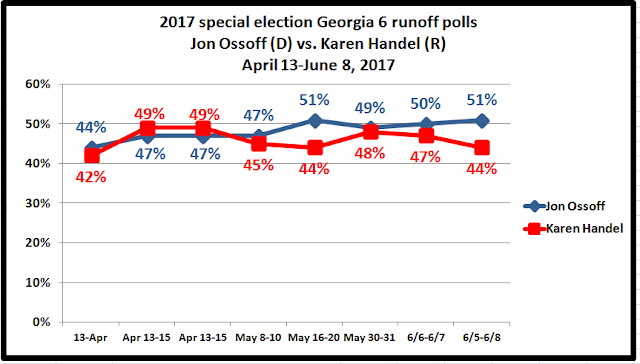 Democrats have a slight advantage in the Georgia 7 runoff.  (FiveThirtyEight, 6/12/2017)


The June 20 runoff in the Georgia 6 special congressional election pits Ossoff, a former congressional aide, against Republican Karen Handel, Georgia’s former secretary of state. In the first round April 18, Ossoff won 48 percent of the vote, far more than any of the other 17 candidates but short of the 50 percent he would have needed to win outright. (Georgia uses a so-called jungle primary, in which all candidates regardless of party affiliation run against each other.) Handel came in second with 20 percent of the vote, earning the right to face Ossoff in the runoff. 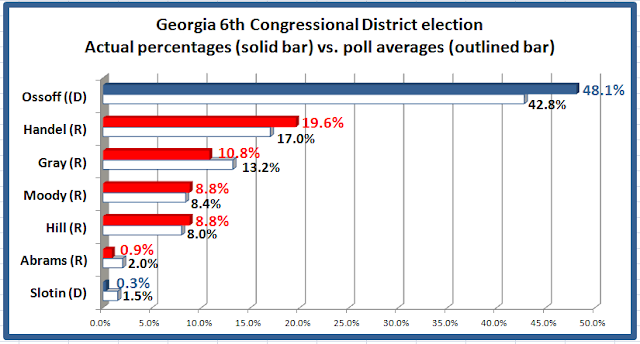 Mr. Ossoff’s strong showing will ensure that national Democrats continue to compete here and will increase pressure on the party to contest a special House election next month in Montana that it has so far ignored. Combined with Democrats’ better-than-expected performance in a special House election in Kansas last week, the Georgia result will be an immediate boon to Democratic groups, lifting their fund-raising and bolstering candidate recruitment efforts, while sobering Republicans who are assessing whether to run in Mr. Trump’s first midterm election.

Yes, Donald, concerned Americans everywhere are glad for your help.

Yup, BIG "R" win in a district that a Democrat hasn't represented since the Carter administration.