Seth Abramson and the outlier polls (The North Carolina edition)

I've said it before, and I'll say it again.  It's always advisable to take every poll with a grain of salt.

The Elon University poll, as it turned out, is an outlier, i.e., a statistical observation that is markedly different in value from the others of the sample, as defined by Merriam-Webster.  (If it's any comfort, Elon also lowballed Donald Trump in the same poll on the Republican side.  For some odd reason, this poll uncovered more undecided voters.)


North Carolina is an odd case, given that up until March 7th -- less than a week ago -- the polling was showing Sanders cutting Clinton's lead from 17 points down to 10. All that's happened since then is that Sanders has pulled off "one of the greatest upsets in modern political history";  (i.e., Michigan;  see below)


In the end, the NC Dem primary wasn't the rout anticipated in the polling, but Clinton nonetheless ended up with a comfortable margin of victory. 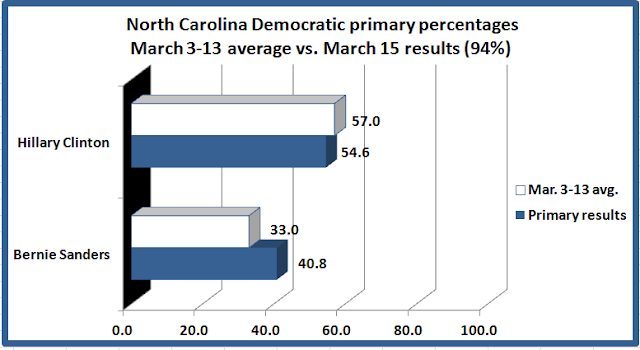 
With a polling miss this big, no single factor is likely to explain it, so more than one answer could be correct.