A Wise Investment in Billings' Future: A New Public Library 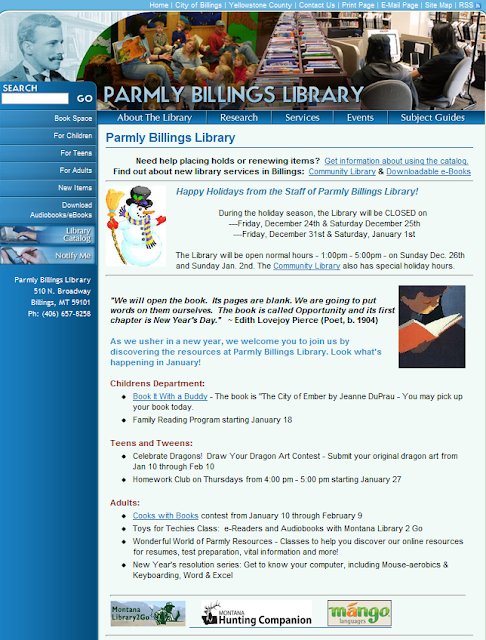 Excerpt:     What should a new Billings library look like?

Billings citizens will be asked that question this winter and are scheduled to get some proposals this spring when a design study is presented to the City Council. Replacement or total renovation of the Parmly Billings Library has been on the city's Capital Improvement Plan for years. The present library building contains more space than the library needs, but the space isn't well suited to the needs of library users and the old warehouse-turned-library needs an overhaul of all building systems.

A citizens opinion survey last summer showed strong support for keeping the library near its present Broadway location in the 500 block of Broadway and North 29th Street.

The City Council has directed staff to develop a plan that could be taken to voters in 2011. The city is talking with Stockman Bank and Billings Clinic about acquiring additional property in the 500 block of Broadway by trading city property elsewhere. The public planning process will involve an architect with experience in designing outstanding public libraries, a local architectural firm and the Center for Community Design at the School of Architecture at Montana State University in Bozeman, according to Library Director Bill Cochran. The architects and students will gather public input and deliver design/budget options to the council.

Meanwhile, the Parmly Billings Library Foundation has started a campaign to raise $5 million to help pay for a new downtown library. The fundraising got off to a great start with an anonymous donation of $2 million to construct a new libary of architectural significance.

A new library is expected to cost around $13 million and voters would be asked to approve a bond issue to pay for the balance. The design needs to be popular; the budget needs to be acceptable to a majority of Billings voters.

We look forward to exploring the possibilities for a new library in 2011.
Posted by Retiring Guy at 9:07 PM