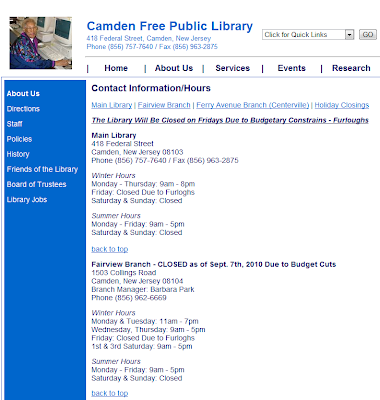 Excerpt: Rutgers University and Camden leaders are discussing a plan to place a public library branch on the Rutgers-Camden campus, officials said Friday.
The move would be part of a broader plan to make city libraries part of the Camden County system.

Under the deal being considered, the existing downtown library on Federal Street would be replaced by a facility on the campus. The city's new branch in the Centerville neighborhood is expected to remain open.

"Given the limited financial resources, everyone is looking for a way to continue library services to the people of the city, and this is a way," said Martin McKernan, president of the Camden library board.

The Camden Free Public Library system appeared on the verge of insolvency this year after state and city funding cuts.

The city cut funding for the 105-year-old library system from $908,000 last year to $389,000 this year, part of an effort to close a $28 million budget gap. In August, Mayor Dana L. Redd announced talks to merge the city's libraries into the county system.