Public Libraries: Home to Many Formats 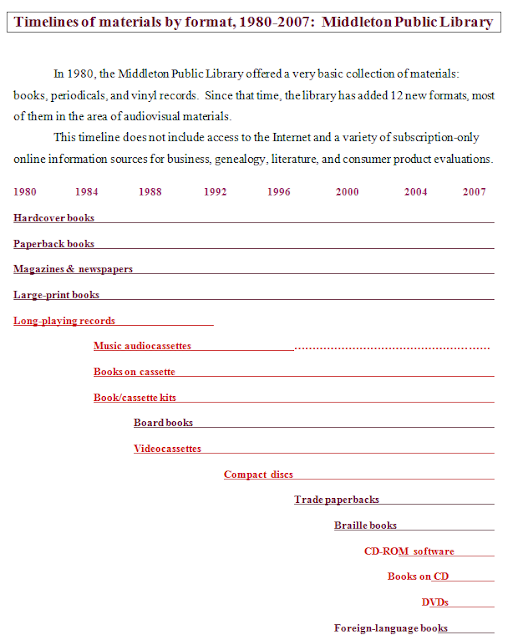 (A 'sidebar' document Retiring Guy prepared as part of the Middleton Public Library's ongoing planning process.  It should be pointed out that Middleton dropped the cassette formats in 2008 and added Playaways the same year.  Note:  A revision for this fall's LIS 712 class should include online/digital formats, including access to fulltext online databases.)

Excerpt: Before Carlyn Ellis and her husband go to Norway, the couple went to the library.

She picked out several DVDs about the country they soon will visit.

"You just don't see this selection anywhere," Ellis said as she perused the travel DVD section.

Library patrons increasingly are checking out much more than books. DVDs have become a huge part of what libraries offer, with more than 2.1 million DVDs a day loaned out nationwide - more than the 2 million Netflix ships each day or the 1.4 million Redbox rents, according to the Online Computer Library Center.

"We feel very strongly about the importance of libraries providing access of the record of human expression and ideas, no matter what the format," Krieg-Sigman said. "When the human experience was limited to print, that's what libraries had."
Posted by Retiring Guy at 6:28 AM