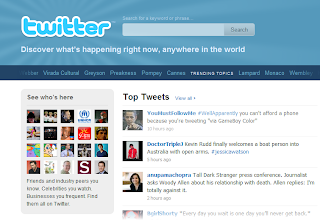 Link to May 15 Charlotte Observer article, "African-Americans find home in the Twitterverse".

Excerpt:  A recent study from Edison Research, a media research firm, is the latest to confirm Twitter's popularity among African-Americans. They make up 25 percent of Twitter's 17 million users, according to the Edison study - almost double their 13.5 percent of the U.S. population.

Facebook's more than 116 million U.S. users, by contrast, reflect roughly the same diversity as the American population. (Worldwide, Facebook has more than 400 million users).
Posted by Retiring Guy at 9:50 AM