GET ME REWRITE: Disgraced, besotted former White House doctor Ronny Jackson is in the news again 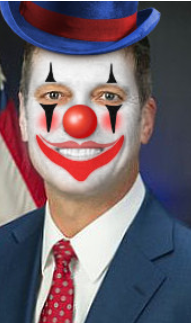 Stars and Stripes, 6/19/2021
As a supporting cast member in the Trump Clown Show, Ronny was a notable shoveler of shit.

U.S. Rep. Ronny Jackson, R-Texas, led a group of 14 Republicans who sent Biden a letter on Thursday urging him to take a cognitive test and make the results public.

The freshman Congressman served as White House physician under former presidents George W. Bush, Barack Obama and Trump. In 2018, he gave Trump a clean bill of health after an annual physical and cognitive test that came amid questions about Trump’s mental fitness to serve.

At the time, Jackson said it was the first instance he knew of a cognitive test being administered to a sitting president, saying Trump was “mentally very sharp."

Original 3/4/2021 post, "Greetings from Texas's 13th US CD, where voters recently elected a bully and a drunk to serve in Congress", starts here

The Art of the Texas Gerrymander

The word "alcohol" appears 56 times in the 37-page report, which draws on initial complaints and interviews with at least 60 witnesses who previously worked in the White House Medical Unit.

The accusations led to Wednesday's Pentagon report — but they did not halt Jackson's political career: The Republican was elected to Congress last November, representing a district in the Texas Panhandle.

Ronny won big, as would any GOP candidate running in this district.

Trump received 79.2% of the presidential vote.