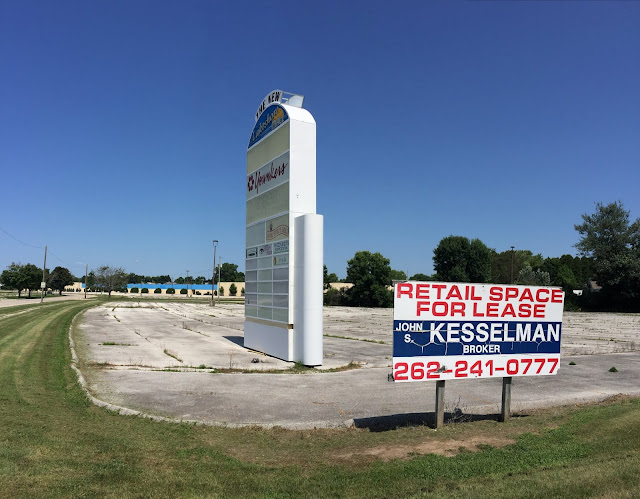 
So far no one is biting.  “This is not something that is unique to Manitowoc,” he said. “This is something you have been seeing with malls that are not located near interstates for the past 20 or 30 years, such as Port Plaza in Green Bay or Northland in Appleton. Retailers want to be where the interstate is.” The Edgewater Plaza site, and its large overgrown parking lot space, offers prime development space, he noted.


From East Magnolia Avenue between Memorial and Johnston drives 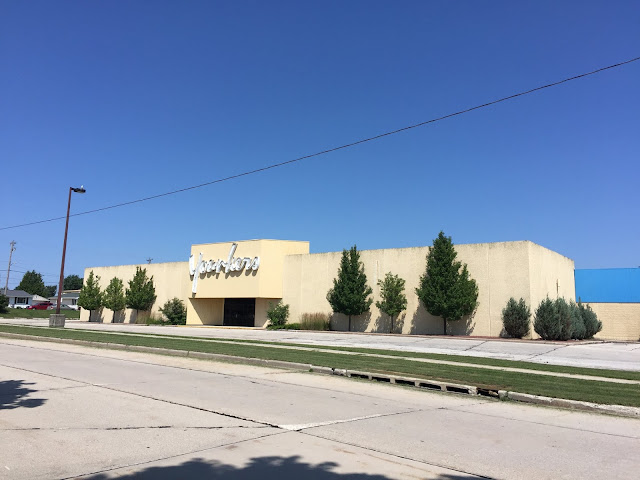 
The story is much the same in Manitowoc, Wis., where the imminent shuttering of Younkers will leave the once-thriving, now largely deserted Lakeshore Edgewater Plaza mall with just two tenants — a hearing aid shop and Wizard’s Kingdom, a children’s play spot featuring a ball pit, bouncy castles and arcade games. 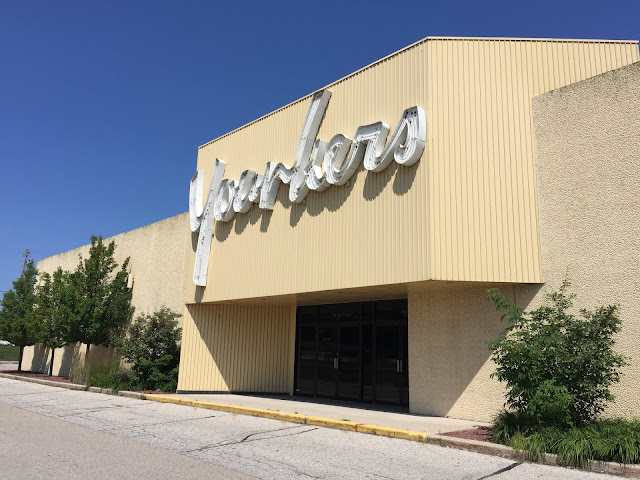 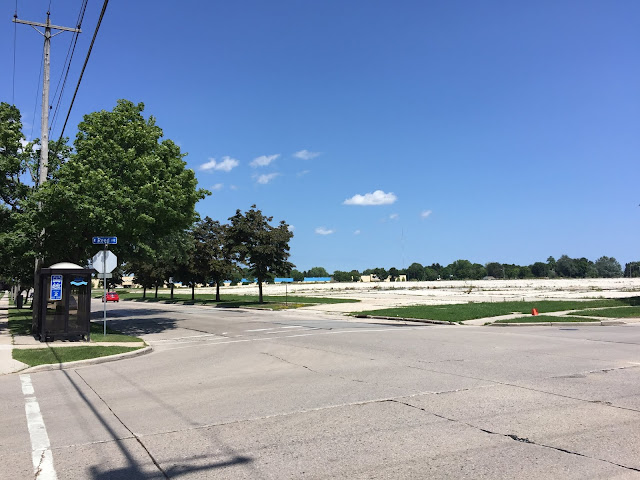 1/31/2018 update, "The thread has snapped:  The New Lakeshores Mall (or whatever the hell it's called) is now one of the deadest of dead malls", starts here. 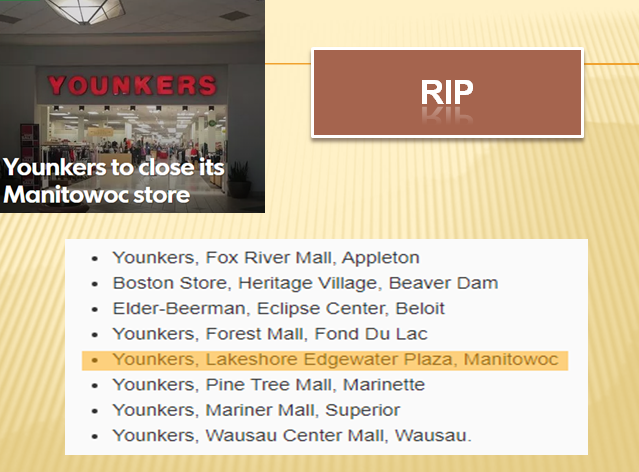 Bon-Ton identifies stores it plans to close, including 9 in Wisconsin.  (Herald-Times-Reporter, 1/31/2018) 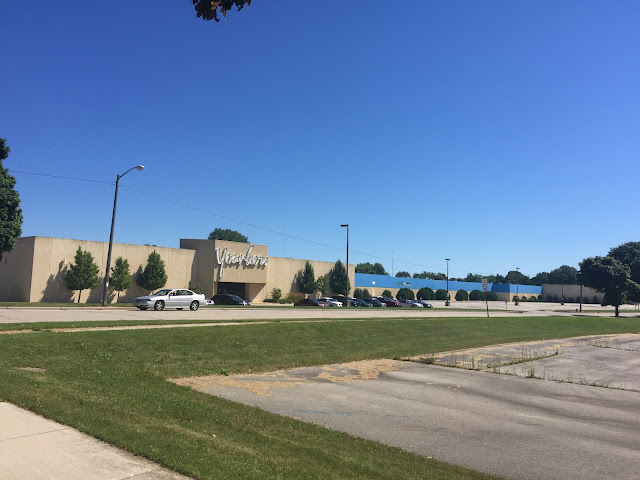 The New Lakeshore Mall is visible in the center-right distance across the vast expanse of what was originally the Mid-Cities Mall, Manitowoc's first enclosed shopping center, which opened in 1968.

A view from near the intersection of Memorial Drive and East Reed Avenue. 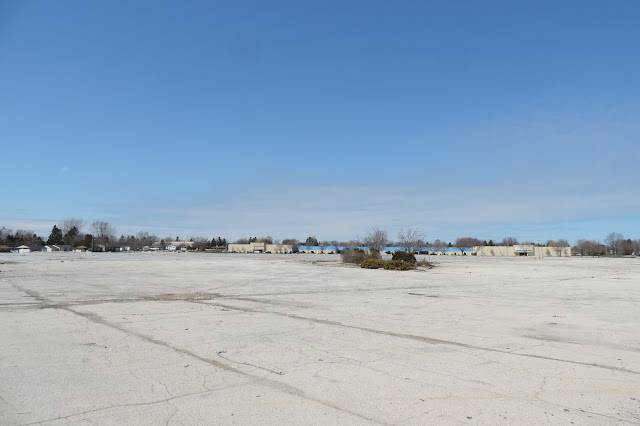 In the late 1970s, somebody decided that Manitowoc needed a second mall, where Younker's still manages to do business. 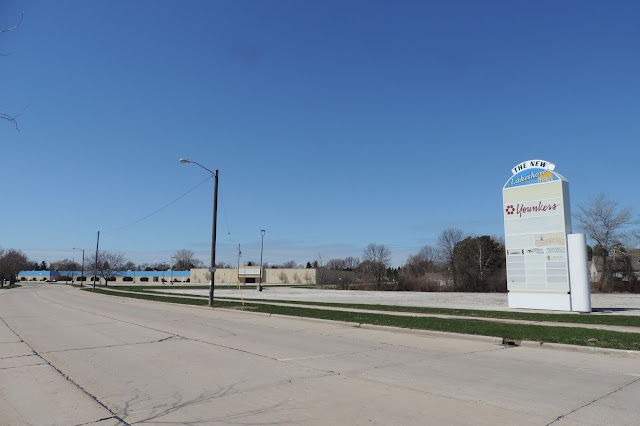 To my surprise, I was able to access the building through the doors leading to the mall area. 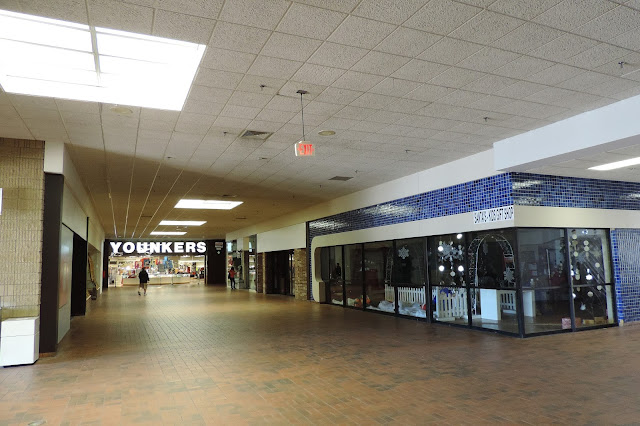 I assume the Santa's Kids Gift Shop was most recently in operation last December.

Yes, it's, ahem, deflating times for retail in this area of Manitowoc. 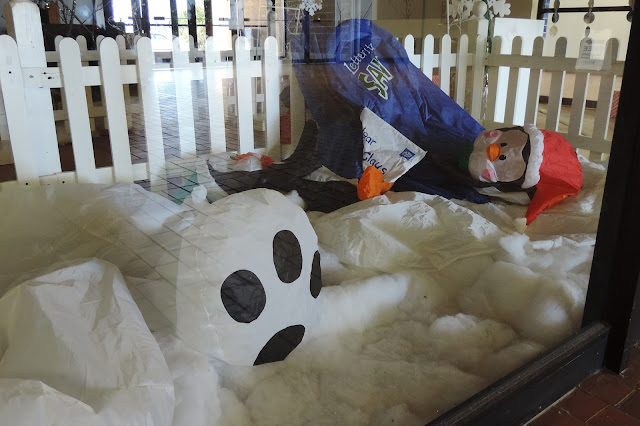 A view in the other direction. 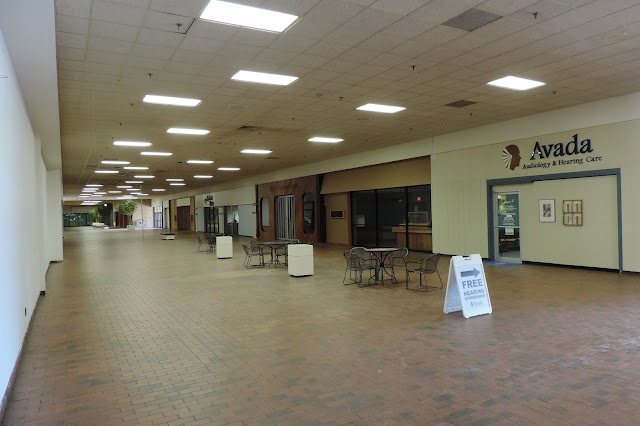 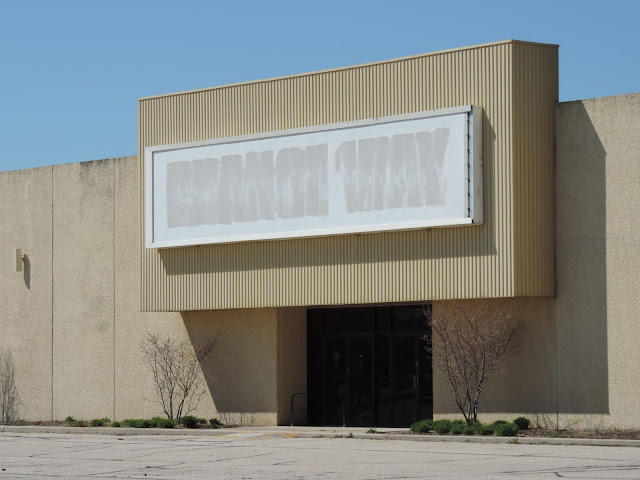 1981. Interstate 43 opens just west of Manitowoc, which eventually changes the retail focus of the area. Around this time, a plan was considered to expand Mid-Cities Mall and link it to the Edgewater Plaza.

1984. Hardee's restaurant is appended to Mid-Cities mall next to Penney's.

1980s: The inline composition of Mid-Cities Mall shifts from predominantly national chains to local stores with some nationally-known semi-anchors. Montgomery Ward closes its store in the mid-1980s.

1998:. Osco Drug closes its mall store and relocates to a new standalone building nearby -- across East Reed Street.

Early 2000s: The Edgewater Plaza is painted beige and renamed the Edgelake Plaza, to little effect.

2007. The former Edgewater Plaza changes ownership and receives its second name change in the process:  "The New Lakeshore Mall."

2016. The New Lakeshore Mall hangs on by a thread.