As They Have Been Doing All Along, Libraries Adapt to Technology 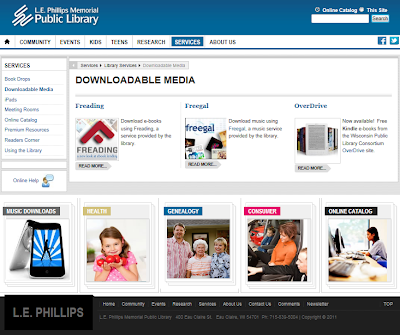 Will the local library as we know it soon be a thing of the past?

Librarians say people have to remember the publishing industry itself doesn't know exactly what to make of e-books. For instance, some publishers have declined to share their books with libraries in a digital format, said Eric Jennings, a research and instruction librarian at UW-Eau Claire.

Meanwhile, the market hasn't determined what will be the dominant platform for e-books. Will it be the Kindle? The iPad? Something else?

John Stoneberg, director of L.E. Phillips Memorial Public Library in Eau Claire, likened the situation to the VCR tug-of-war between VHS and Betamax in the 1980s. The future of e-books, the publishing industry and libraries are in flux right now, Stoneberg and others say.

And librarians say it will be some time before digital checkouts outstrip their hard-copy counterparts.

"I don't see that happening anytime in the near future," Jennings said.