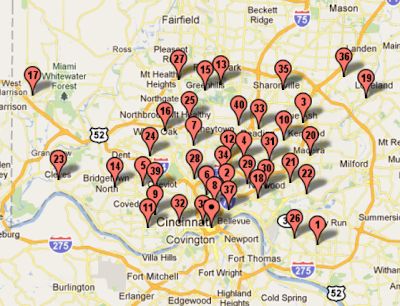 Excerpt: Some Hamilton County communities could lose their libraries in the wake of state cuts that helped create a $3.2 million budget shortfall for the libraries.

The Public Library of Cincinnati and Hamilton County suffered a triple whammy this year:

The state is giving libraries 5 percent less - about $1.6 million in the case of Hamilton County.

Declining property values mean about $1.8 million less is expected from an operating levy voters approved in 2009.

The creation of a county economic development program will divert delinquent tax dollars - about $35,710 - that previously went to the library.

Library Executive Director Kimber Fender said that after years of belt-tightening, there are few places left to cut. "Maybe" branches will have to close, she said.

"We're not thinking about immediately closing any branches, but part of a strategic plan is to look at all our facilities, their locations and their hours," Fender said.
Posted by Retiring Guy at 7:46 PM