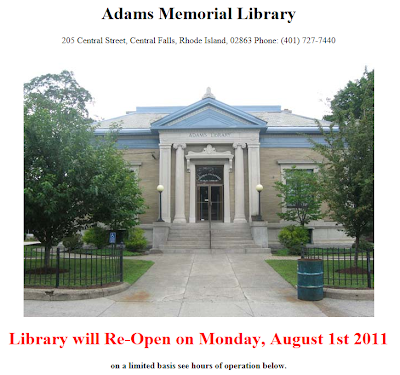 Outside of a grid listing the hours of operation, the above screenshot is all you'll find on the library's webpage.

On the one hand, I greatly admire the way in which a group of volunteers stepped up to reopen their library, even though it's on a limited basis and with reduced services.   On the other hand, I can imagine people who don't have an understanding of library operations or an appreciation of a library's value to its community saying, "Gee, the world didn't come to an end, did it?*  We should have done this a long time ago."

[*A comment recently been made to me in reference to the elimination of maintenance of effort.  "I'd say the jury's still out on that one," I replied., "depending on where you live."]

Excerpt: Adams is chairman of the library trust and Shannahan is a former library director. They recruited a group of teenagers and senior citizens to staff the library on Mondays, Wednesdays and Fridays from noon to 5 p.m. Operating under its original name, the Adams Memorial Library, for now the trust’s $200,000 building endowment is being used to cover operating expenses. But Shannahan said that money cannot be used for salaries. Hence a volunteer staff.

“Welcome to YOUR library,” a banner festooned over the door announced, with a half-dozen pleas in two languages for volunteers taped to the doors.

On Monday, despite sometimes heavy rain, the library saw a steady stream of visitors, though off the 150 or so a day it has been averaging since the reopening.

Besides eliminating the paid staff, the loss of city funding severed the library’s connection to the Ocean State Libraries network. When Flanders decided the city couldn’t afford its $13,000 bill for six months of OSL membership, the organization cut the library off .

It was like giving the library a massive case of amnesia, [my emphais] Shannahan said. The OSL [Ocean State Libraries] computer system was where the library kept the list of its card holders and the books in its collections. Without OSL access, Shannahan said, they don’t know who has a card or what books they have.

It would take more than money to rejoin OSL. Under the network’s rules, a city Central Falls’ size would need a full-time library director with a master’s degree, a full-time children’s program director and a part-time circulation manager. Without money from the city, Shannahan said, the slimmed-down, all-volunteer Adams Library doesn’t have a prayer of complying. The plan is to be local and independent for the foreseeable future, he said.