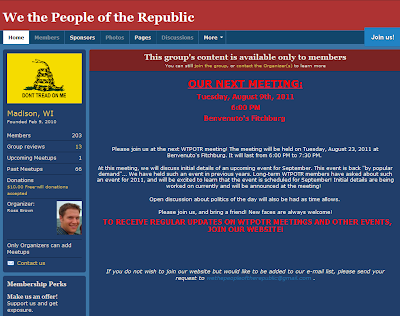 From: We the People of the Republic
Sent: Wednesday, August 10, 2011 12:51 PM
Subject: FW: Dale Schultz sells out
An important message from Kirsten Lombard of The Wisconsin 9/12 Project...
Ross Brown
Founder
We the People of the Republic
Dane County, Wisconsin
--
MISSION STATEMENT:
We the People of the Republic (WTPOTR) is an organization that gathers around five principles: uphold the Constitution of the United States of America, minimize the size and scope of government, maximize personal liberty, support the free market and Capitalism, and advance a conservative fiscal policy. WTPOTR promotes these five principles within Dane County, Wisconsin by generating interest in the principles through educational events and marketing; by peacefully assembling to petition our government regarding the principles; and by networking with (but not endorsing) elected officials, or candidates running for elected office, who also support the principles. By promoting the principles, WTPOTR will help establish governments at local, state, and federal levels whose foundations are firmly rooted in the principles, and which are governments "of the people, by the people, and for the people," so that current and future citizens of the United States of America may freely pursue individual prosperity and actualize the concept of self-determination.

FORWARDED MESSAGE:
Subject: Dale Schultz sells out
Friends,
Conservatives did not---I repeat DID NOT---retain control of the State Senate last night.
I have solid inside information that Dale Schultz went to Minority Leader Mark Miller this morning to offer himself as an "independent" vote.
That means we're back at SITUATION CRITICAL. It is more imperative than ever that Kim Simac and/or Robert Steitz win their races next week.  And it is up to average, every day citizens like us to make it happen.
The Simac campaign, I know, is in particular need of assistance.  They managed 900 doors last weekend, and most of that was only with people who came from out of district to assist.
There are opportunities to make phone calls, but lit drops are the bigger issue. Physical arms and legs are required.
If you can help---in any way, shape, or form...
If you have any spare moments between now and next Tuesday...
If you can take a day or two from work or the weekend...
DO NOT LET THIS OPPORTUNITY TO HELP PASS.
We do not want to be saying we didn't do everything possible when this is over next week.
There are people who can help you find a place to stay up in the Northwoods if needed.  But we MUST get this job done.
The Field Manager for the Simac campaign would be THRILLED to hear from anyone who can volunteer their time and energy.


Jump on board now and get as many people as you can to jump on with you.  Let's get this thing done. 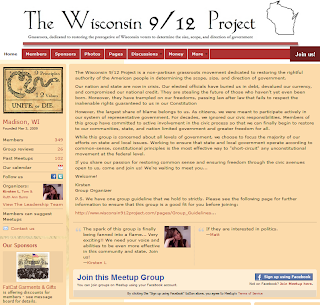 Labels: recall elections, We the People of the Republic, Wisconsin 9/12 Project