Excerpt:   A Michigan group supporting a proposed tax to save a library is putting up signs promising a book burning if the library closes.

The group, called Safeguarding American Families, or SAFE, registered June 20 with Oakland County as a ballot question committee in favor of an Aug. 2 ballot measure, which would levy a tax to provide dedicated funding to the Troy public library for five years, The Detroit News reported Wednesday.

The group's yard signs promise to hold a book burning party if the library closes, which would happen Aug. 5 if the ballot measure fails.

"Our agenda's pretty simple," the group posted on its Facebook page. "We want the library to close so we can have a book burning party. What's not to get?"

Here's the text of an email from Safeguarding American Families that I received  minutes ago.  (The question marks subbing for apostrophes is as sent.)

Through the past two elections, the conversation about the future of Troy?s library has been a rational one. Dollars and cents, political posturing, stats and numbers. But a library means so much more to our community than that. It?s even more than a place to gather, study, or borrow books. A library is a place where we learn to love books. A place to celebrate books. A place to learn that books are so important, our community has an entire building dedicated to them.

Books burned or shrink wrapped. In the end the result is the same. If the vote fails, the doors will be locked and the books gone from sight. Out of sight, out of mind. We can?t kid ourselves into believing the library will reopen any time soon. If ever.

We encourage the passionate discussions to continue. And we hope it?s this passion that will get people to the polls on August 2 to vote YES and save our precious library.

From the lates version of the Book Burning Party Facebook page. 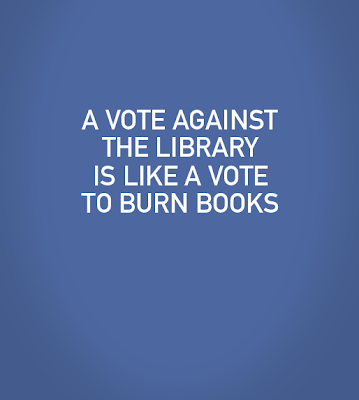 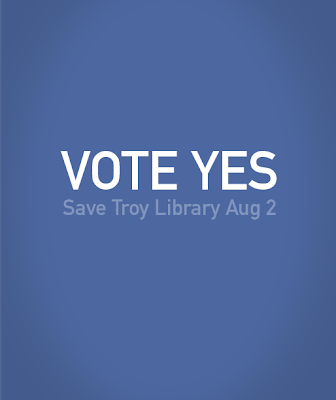 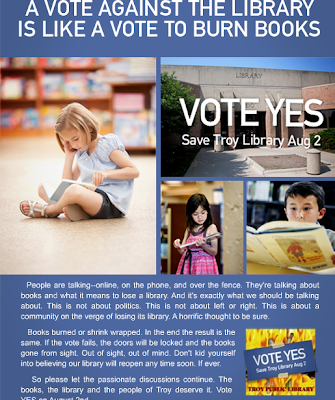