Another Example of the Republicans' Divide-and-Conquer Strategy 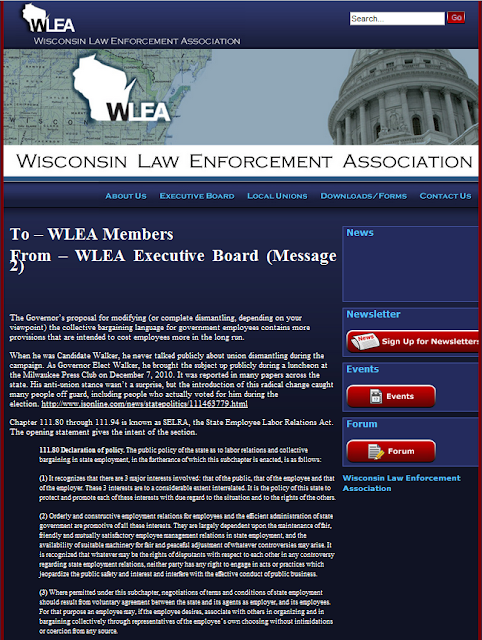 Paragraph 2 from the above screenshot:   When he was Candidate Walker, he never talked publicly about union dismantling during the campaign. As Governor Elect Walker, he brought the subject up publicly during a luncheon at the Milwaukee Press Club on December 7, 2010. It was reported in many papers across the state. His anti-union stance wasn’t a surprise, but the introduction of this radical change caught many people off guard, including people who actually voted for him during the election.

Excerpt:    But Fuller is already facing a family squabble of another kind. As president of the Wisconsin Law Enforcement Association (WLEA), he's taking a lot of heat from those members of his union who are not exempt from Walker's plans.

"We are currently experiencing all kinds of backlash from our membership because of what I consider to be cherry picking of our union by the governor," he says.

The union, in short, is in danger of coming apart. And that's likely what Walker wants.
Posted by Retiring Guy at 10:16 AM