Please catalog as fiction: WEDC is Scott Walker's baby, so take these in-house Foxconn job projections with a big grain of salt 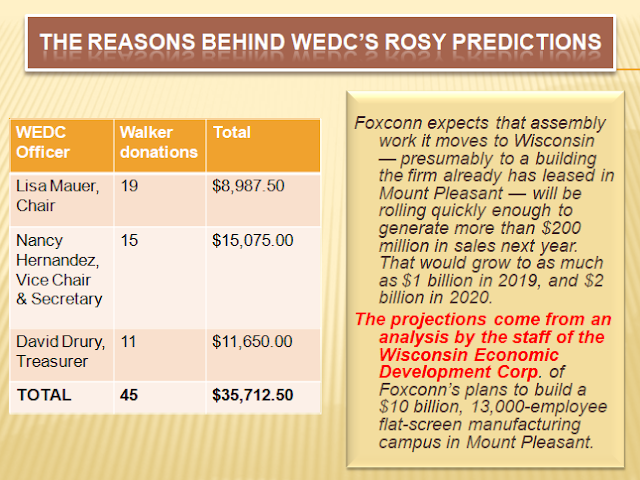 
Reported in Foxconn to begin by hiring hundreds of assembly workers in 2018.  (Milwaukee Journal Sentinel, 12/1/2017)

Mount Pleasant, where I live, is being very secretive. Information was released slow. We did not have vote on this. The only open meeting about it was held in venue that holds 85 people that was sucked up by politicians.
Foxconn has been shown the door by China. Terry Gou runs Foxconn a huge sweat shop where several workers committed suicide Terry Gou's "fix", he had nets installed to stop workers from jumping out of windows to their death. He called his workers animals.
Making LCDs requires heavy metals such as Mercury, Cadmium, Chromium, Zinc, and Copper.”
Our disclosure requirements in the United States and the state of Wisconsin have been watered down, destroyed. Our EPA, and the Wisconsin Department of Natural Resources and state laws have been stripped down to nothing.
Scott walker and #republicans have allowed this foreign corporation to write there own environmental laws. And pull 22 million gallons from The Great Lake Michigan a day!
Fisk Johnson owner of JC Johnson stands with Terry Gou like he is his sponsor in Alcoholics Anonymous, and he will make sure Foxconn will not pollute and be a good company to for, and be environmentally safe. He is putting Jwax's reputation on the line.