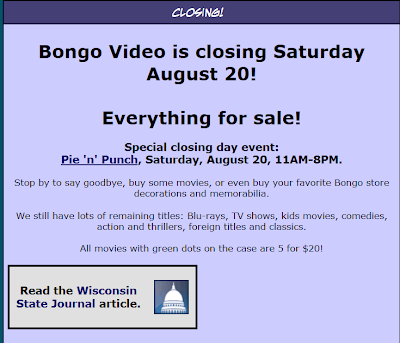 "We decided we were the folks to do it," she said.

Three locations and 16 years later, their homemade store that featured a lime-green sofa and 10,000 titles met its end on a day when a walk outside the store revealed bright sun, sailboats and, across Lake Monona, the State Capitol. Days like that don't normally bring out the crowds to Bongo - bad weather tended be better for business - but a steady stream passed through.

David Wilson biked in from McFarland to his favorite video store and left for the last time with a few "Ace Ventura" DVDs, to be enjoyed with his daughter and wife.

"I'm sorry to see them go," said the 53-year-old. "I guess this means no more bike rides to the video store."

Bongo did its best to keep up with the latest technology, beginning with VHS cassettes, transitioning to DVDs then to Blu-ray Discs, but became another brick-and-mortar video store done in by computer downloads, on-demand movies, subscription services and vending machines.

Streckert said she still doesn't fully get the appeal of watching "big huge movies on tiny little (computer) screens" but acknowledged that's the way the world is going.

Video Station.
Posted by Retiring Guy at 9:45 AM