Subtitle: Retiring Guy takes a deep dive into the paper's topic.  And if I emerge from this exercise with a Bob-like knowledge of even 5% on the subject, I'll be satisfied.

Thanks, Bob, for providing us with this thorough background paper.

[Note:  Except for headings, bold print has been used by me for emphasis.]

LINK to document
Recent events in Wisconsin related to K-12 school and library access to broadband and Internet service have elicited numerous questions on why this has become such a contentious issue. This paper provides background information on how our schools and libraries get their broadband and Internet service and asa result attempts to answer some of these questions. This is a relatively in-depth review. Those interested in a more direct and succinct comparison of the claims by the telecommunication carriers, and the counter claims by the University of Wisconsin (UW), can view the summary provided by UW-Extension. (Footnote #1)
Or view (1) right here. 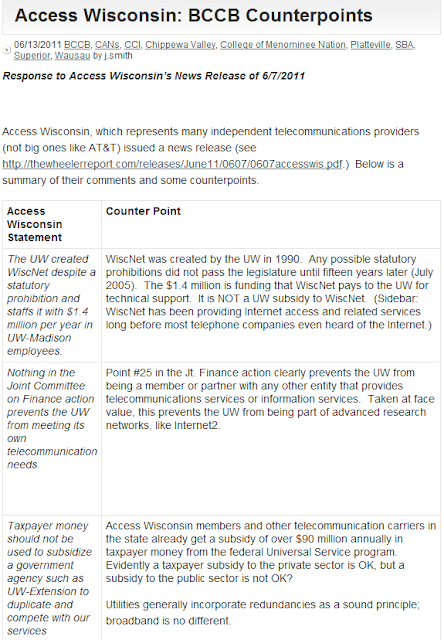 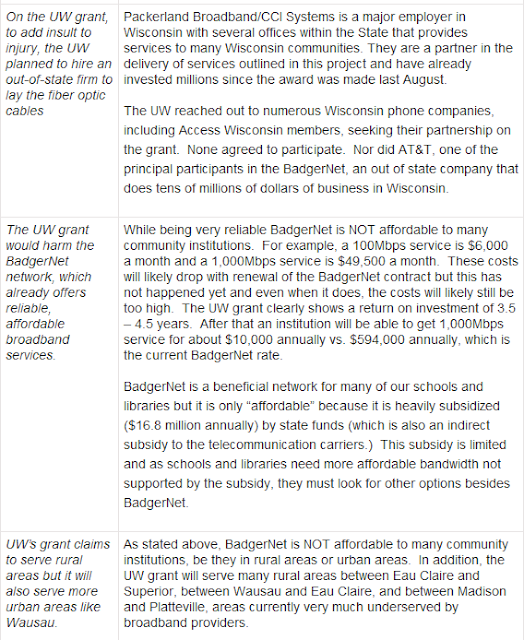 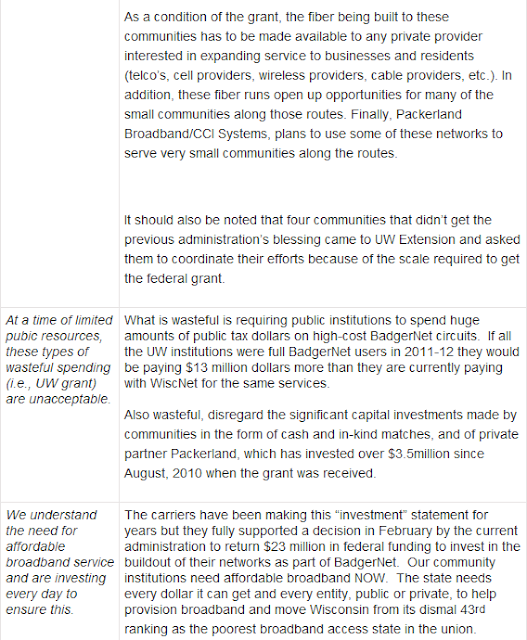 As Bob points out in footnote #2:   This is not the case for businesses and residential households where the broadband connection and Internet access are very often provided by the same company, usually the local cable or phone company.
The Historical and National Perspective
The recent dispute regarding what entities can or should provide broadband and Internet services in Wisconsin is not a new issue nor are efforts by the private sector to restrict what services the public sector can provide.   Over a decade ago the telecommunications carriers in the state lobbied to get legislation passed to restrict municipalities from providing telecommunications and broadband services.  They finally succeeded in 2004. (Footnote #3)    2003 Wisconsin Act 278/2003 Senate Bill 272.

See full analysis here.
The DPI opposed this legislation because it restricted broadband choice.  In 2005 the telecommunications lobby was again successful in getting legislation passed that limited the UW to providing telecommunications services only for its campuses or to carry out its mission. (Footnote #4)  2005 Wisconsin Act 25. 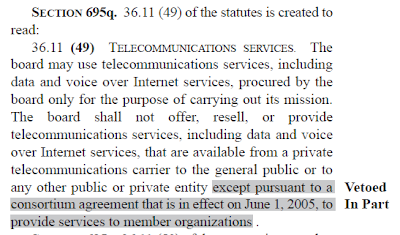 This issue is also not unique to Wisconsin.  The National Broadband Plan, released by the Federal Communications Commission in March 2010, identified eighteen states that have some restrictions on the public sector providing telecommunications or broadband services. (Footnote #5) 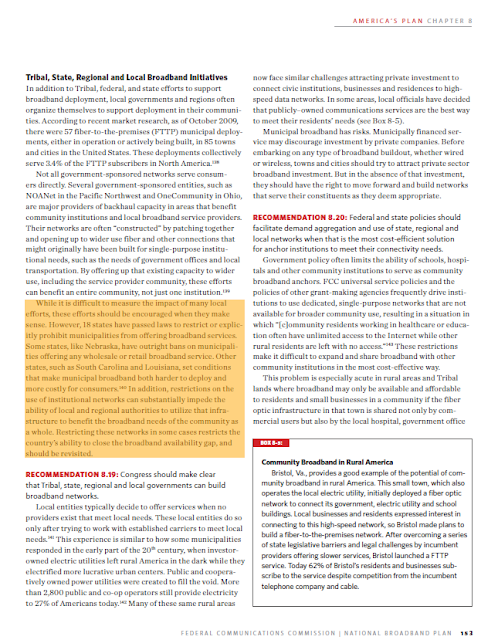 [Another very recent example.  From Indiana.]
Most of the restrictions prevent municipalities from providing these services to the private sector (e.g., businesses, residential households).  This is an important distinction in understanding the current debate in Wisconsin where the telecommunications carriers are attempting to prohibit a public sector entity (e.g., UW) from providing or assisting in the provision of broadband and Internet services to other public sector entities (e.g., schools, libraries). In the UW's broadband grant it is NOT providing services to the private sector.
BadgerNet and WiscNet
To understand the school and library broadband and Internet landscapes in Wisconsin it is necessary to have a basic understanding of BadgerNet, the state broadband network, and WiscNet, the state’s largest not-for-profit Internet provider. 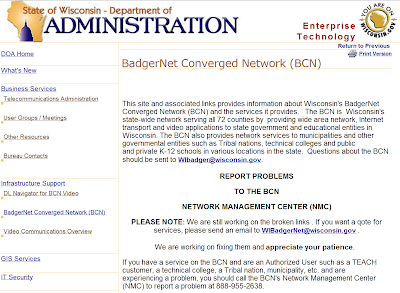 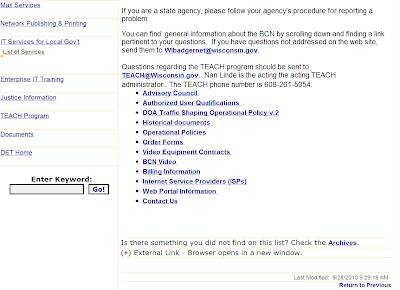 In 1993, then-Governor Tommy Thompson established a Blue Ribbon Telecommunications Task Force which was charged with developing a vision for a statewide telecommunications network for educational institutions and government agencies. This task force set the foundation for creation of the BadgerNet network in 1995. Today the BadgerNet Converged Network (BCN) [Footnote 6] connects 2,420 sites throughout the state with a breakdown as follows:
As these statistics show, 95% of BadgerNet sites are either subsidized by TEACH or are state agency sites which are required by the Department of Administration (DOA) to use BadgerNet.  [Footnote #7 - State agencies can seek permission from DOA to have another broadband provider.]  Thus the carriers that provide the BadgerNet circuits have a captive market.

BadgerNet provides broadband circuits and distance education networking. It does not provide Internet access [Footnote #8] and it does not serve private businesses or residential households. The state does not own BadgerNet’s circuits or networking infrastructure. Rather, at its inception the decision was made to outsource the network to a consortium of telecommunication carriers with AT&T as the prime vendor.  The current contract DOA has with AT&T expires in late 2012 and both parties have been negotiating since March to extend it to 2016. [Footnote #9] One of the major benefits of the extended contract will be significant reductions (often 50%) in circuit costs. Because the reduced rates are not yet in-place, BadgerNet customers in total are paying over $200,000 each month to the carriers under the higher rates in the current contract. [Money that those 2,420 BadgerNet sites could put to better use.]  The BadgerNet Advisory Council advises DOA on network issues and it has repeatedly encouraged DOA and AT&T to get the contract extension done. (Bob Bocher serves on the council.)

From the K-12 and library perspectives no discussion of BadgerNet is complete without reference to the TEACH program. [Footnote 10] 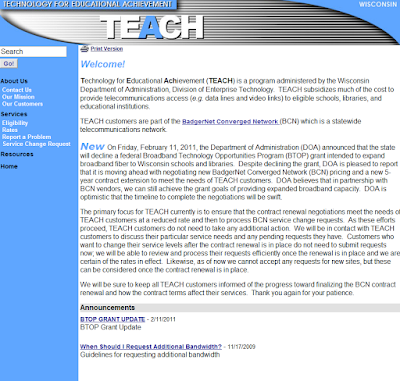 TEACH (Technology for Educational ACHievement) was created in 1997 and it subsidizes access to BadgerNet for ―Educational agencies‖ as defined in state statutes (16.99[2g]). This includes school districts, private K-12 schools, public libraries, private academic institutions and technical colleges. It is important to note that TEACH usually subsidizes only one circuit per educational agency. Since most school districts have multiple schools, they are then responsible for creating and funding a district network linking their other schools to the BadgerNet circuit, which is often at the high school. This circuit then connects to an Internet provider for district-wide Internet access, although in some districts individual schools may have their own direct connection to the Internet. Very few of the other  schools in a district use BadgerNet because without a TEACH subsidy it is too costly.

TEACH pays the carriers approximately $24 million annually in subsidies for its 1,144 sites of which 94% are K-12 schools and public libraries. TEACH funding comes from two sources: 1) $16.8 million annually is from the state Universal Service fund, [Footnote #11; see page 4 of audit] and 2) $8 million annually is from the federal E-rate program. [Footnote #12]  (Both of these funds are paid by consumers as surcharges on their phone bills.) These funding sources have not appreciably increased in over eight years, even though the demand for higherbroadband speeds has increased dramatically. DPI supports the TEACH subsidy because it provides substantial discounts to school districts and libraries. Here are two examples of this:
[Footnote #13] The complete TEACH subsidized rate chart.  Imagine where these libraries and schools would be without these subsidies.


As referenced above, the BadgerNet contract extension will provide substantial circuit cost reductions but the extension is still being negotiated. Thus, TEACH must pay the current higher circuit costs and in March it reached its budget limit. This required TEACH to temporarily halt the funding of school and library requests for more bandwidth. Because of this, TEACH sites needing more bandwidth are looking to other providers outside of BadgerNet.  [Footnote #14: By not having the contract extension done the carriers are forcing schools and libraries to consider other alternatives. Thus the carriers are creating the very condition that makes broadband alternatives, like Community Area Networks (CANs), look attractive.] 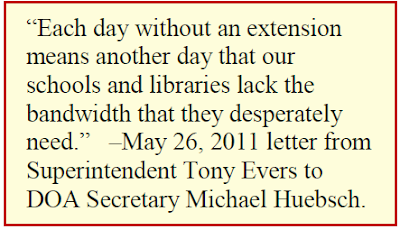 Once the contract extension is signed TEACH can again start funding requests for more bandwidth. DOA has said it is highly likely that school districts and library systems will see an increase up to 100Mbps. DPI has repeatedly encouraged both DOA and AT&T to get the contract extension completed as soon as possible. 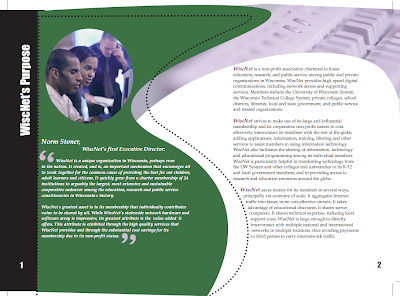 WiscNet is a not-for-profit, member-based association that provides Internet access and a host of other services. [Footnote #15.  Link to document represented by above screenshot.]  At its founding in 1990, WiscNet was a diverse association of public and private institutions which included the UW campuses and eight other private colleges and universities. WiscNet has now grown to over 450 members that include the technical college campuses, school districts, libraries, and state and local governments. WiscNet does not serve private sector businesses or residential households. When BadgerNet was created in the mid-1990s very few telecommunication carriers provided Internet access. WiscNet, which at the time served only academic institutions, expanded its services to include K-12 schools and libraries.

[Footnote #16].     Until 1995 the National Science Foundation controlled the Internet backbone and access was restricted primary to research and academic institutions.

From "The History of the Internet in a Nutshell"
Currently, just over 70% of the state’s school districts and 95% of its public libraries are WiscNet members. Most schools and libraries (over 80%) use BadgerNet for their broadband connection to WiscNet. Thus BadgerNet and WiscNet are complementary services, not competitors. WiscNet is governed by an eleven member board of directors, elected by its members. (Bob Bocher serves on the board.)

Most Internet providers charge their customers based on how much bandwidth they use: The more bandwidth used, the higher the cost. WiscNet charges schools based on student enrollment and library systems are charged based on percentage of state aid. Thus schools and libraries can increase their bandwidth to any speed and their WiscNet costs remain the same. This is important because many school districts and library systems using BadgerNet for their broadband will likely see an increase of up to 100Mbps once the BadgerNet contract extension is finalized. WiscNet was able to eliminate bandwidth as a cost factor because its cooperative model allows it to leverage the aggregate demand of its 450 members to negotiate very low costs for Internet access service and other services too (e.g., filtering). And its many partnerships with other state and national advanced research and education networks further enhances its buying power.