Another Take on the Naperville Public Library Budget Situation 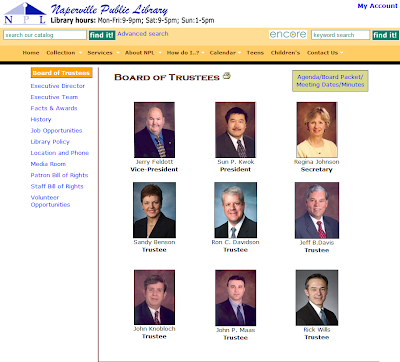 Thanks to Susan Greenwood for sharing.  (Happy to oblige.  And I agree.  Kathy Cichon does a much better job of reporting.)

Excerpt: Closing the library for furlough days, purchasing fewer materials and reducing the readers advisory budget are among the ways Naperville Public Library is considering trimming up to $350,000 from its 2011-12 budget.

During a more than three hour-long workshop Wednesday night, the Library Board of Trustees debated possible areas to cut funding as part of a service analysis. In November and December the City Council conducted a similar exercise, and suggested the library do the same, said Karen DeAngelis, director of finance for Naperville.

The extra scrutiny on the library budget though will have no affect on the city’s current $2.7 million budget gap for next year, she said.

“It will have no impact on the city’s budget gap,” DeAngelis said. “The only thing it will do is reduce the property taxes for the residents.”  [Emphasis added.]